Skaven to be the Center of Endtimes Book IV 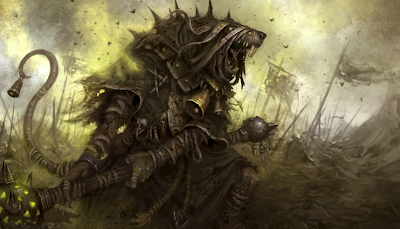 The Black Library's Weekender apparently revealed that the next Endtimes novel will be by Gav Thorpe, which definitely reveals that the rumors of it being centered around the Elves is most likely correct. The interesting thing is that Guy Haley will be the next author, which seems to give us the impression that the Endtimes Book IV will feature Skaven.


Please remember that these are rumors. Hastings does chime in on what he knows to be coming, and below that another rumor bit from searching SKU's.

With the current thought being that the Elves will get no new model releases for their Endtimes books, it seems apparent that book three could very well be squeezed in just about anywhere, with book four and five filling up the first half of 2015.

via Fen on Warseer
The next #whfantasy The End Times books/stories will be by Gav Thorpe (soon, Malekith) and... Guy Haley (goblins ?) #BLWEEKENDER #BLW14

Brother Dimetrius
From Twitter I gathered that the Guy Haley book would feature Skarsnik.
So this seems to confirm that book 4 will feature Skaven. Given Gav's publishing history, we can be fairly certain that book 3 will be an Elf book (or will feature Dark Angels..

via 75hastings69
Plastic vermin lord, other Skaven stuff.
Also it's been a long while but iirc there's still some as yet unreleased big kits, a big dwarf Warmachine with smashy fists and a large angry looking statue type thing, possibly of elvish design?

Think it was based on the (very) old dwarf juggernaught iirc

via Noble.6
A couple of weeks ago, my local GW manager (a Skaven player) searched End Times SKU's whilst I was in-store, looking around known numbers (Glottkin). Luckily GW are relatively predictable and followed a pattern. This is the information we pulled up:

1) Elves novel is called The Curse of Khaine
2) Skaven novel is called Rise of the Horned Rat
3) There is a listing for something called Archaeon, priced at £20. There is nothing currently at that price.
4) Something (unsure of what) called Deathblade. Which sounds fun.

He confirmed that December will be dominated by the Hobbit releases.

His personal opinion on the (possible) 5th End Times book was the Empire et. al fighting back, though potentially could be focussed on Archaeon finally leading his main invasion, with the other factions "joining" to fight him whilst vying for control over their rivals.
11/11/2014
Natfka
News Headlines, Rumors, Skaven, The End Times, Warhammer Fantasy