Its going to be hard to beat the abilties of the Raven Guard, however today's reveal from the Warhammer Community looks at the incredibly fast and hard hitting White Scars. 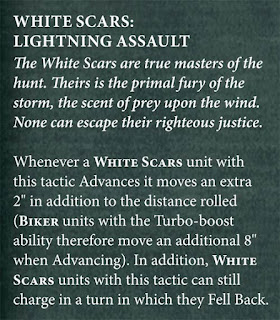 The savage appearance of the White Scars belies an intelligent, measured approach to war; every brutal attack is the culmination of careful planning and reconnaissance. Attacking with primal fury, the White Scars are a storm from which there is no escape. On the tabletop, this is reflected by the White Scars’ Chapter Tactic, Lightning Assault. Firstly, all White Scars biker units move faster when advancing, allowing you to close in on the foe and outflank your enemies. Secondly, all White Scars units – including Dreadnoughts! – can charge in the same turn that they fall back. This is huge, effectively allowing the White Scars to guarantee priority in assaults and letting powerful close combat units engage and re-engage at will without getting bogged down.

This is going to be deadly with Reivers, who, as we’ve mentioned in their tactica, can use Shock Grenades to prevent enemies from firing Overwatch, or stymie units that inflict damage when they charge such as the Ironclad Dreadnought and Assault Centurions. Inceptors, in particular, are one of the most dangerous units that a White Scars general can field, capable of shooting and charging when they fall back thanks to having both Fly and the White Scars Chapter Tactic. Jaghatai Khan would be proud!

As well as Chapter Tactics, there’s a range of ways to further customise your White Scars. Kor’sarro Khan is as powerful as he ever was, and his unique ability For the Khan! boosts the Strength of charging White Scars units – combined with their Chapter Tactics, it’s going to be very hard to defend against getting repeatedly charged by a White Scars army. The White Scars Stratagem, Born in the Saddle, allows White Scars bikers to advance, shoot, and charge, meaning that each biker has a potential threat range of 26″, and you’ll be able to hit your opponent hard before they’re even able to react.

Finally, the White Scars have a unique Warlord Trait and Relic adding yet more powerful options to the army. Deadly Hunter allows your Warlord to deal mortal wounds when charging, while the Mantle of the Stormseer makes it easier for White Scars psykers to cast Smite and unleash the power of the storm. 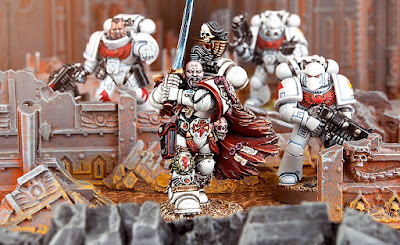