Every Chaos Legion now has a Legion Trait. Legion Traits are powerful abilities available to Chaos Space Marine armies that provide bonuses to Infantry, Bikersand Helbrutes picked from the same Traitor Legion. Much like Chapter tactics, these are designed to represent the unique ways each Chaos Legion fights, from stealthy armies like the Alpha Legion, to full-on melee armies like the Emperor’s Children, who we’re looking at today. 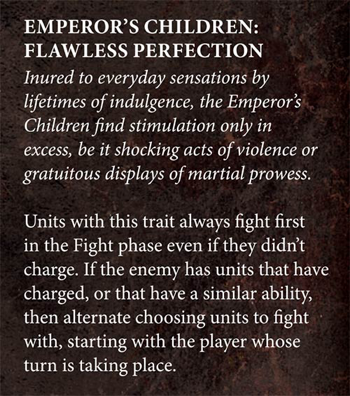 The Emperor’s Children are a terrifying close-combat army in the new Chaos Space Marines codex, with access to a whole host of new abilities that’ll make the army one of the best melee forces in the game. Helbrutes and Chaos Lords alike

Attacking first in close combat is an enormous bonus; used correctly, and combined with power weapons, you’ll be able to wipe out enemies before they have time to react. This is a great defensive bonus too – anyone looking to charge a unit of Noise Marines could find themselves struck down before striking blows. In this way, your enemies are faced with a terrible choice; suffer waves of sonic firepower at range or be forced to attack you in close combat. 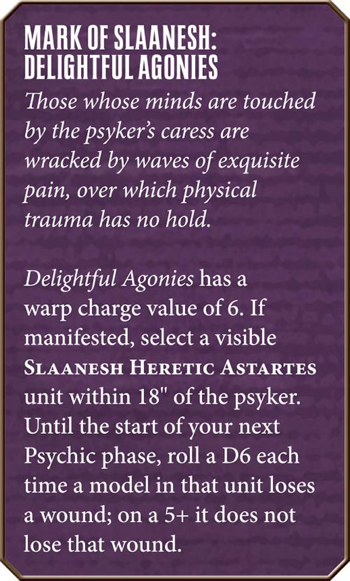 Possessed are one of the most improved units in the new codex, gaining an extra Wound at no increase in points cost. Throw in Delightful Agonies from a nearby Sorcerer, and you’ll be able to weather even the heaviest of fire. You’ll be able to close on enemies fast and shred them with a high-volume of armour-piercing attacks. This is the core combat unit you’ll want in an Emperor’s Children army.

Havocs have a home in an Emperor’s Children army thanks to Endless Cacophony; this Stratagem allows any Slaanesh Infantry or bikers to fire again at the end of the Shooting phase – perfect for getting some extra value out of a unit with lascannons or missile launchers. Similarly, flamer-armed Chosen are a solid pick in an Emperor’s Children army and well placed to take advantage of Flawless Perfection in close ranged firefights.