Now up from the Community site is a preview of the Raven Guard, which get a -1 to hit Raven Guard units outside of 12". Wow, that is cool, and quite powerful, making them very hard to hit, especially for armies that do not have great shooting. Then there is the stratagem to " Strike from the Shadows". I think I see a lot of new Raven Guard armies coming soon. 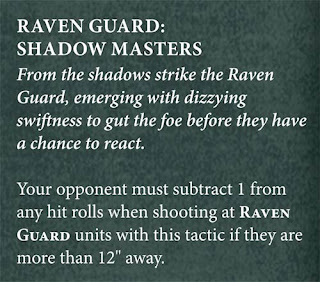 Shadow Masters is one of the most versatile and powerful new Chapter Tactics, offering a great bonus for all sorts of armies. Raven Guard Scouts now live up to their reputation in the background, and units of snipers with camo cloaks will be incredibly difficult to displace from cover, while other ranged support units like Devastators, Intercessors and even ranged Dreadnoughts will benefit hugely from better defences against shooting. Like all the new Chapter Tactics, the purpose of this rule is to reward focused army building with powerful benefits that allow for a range of viable armies.

The Raven Guard aren’t just a shooting army – on the other side of the coin, they’re still a potent combat army. Kayvaan Shrike, now promoted to Chapter Master of the Raven Guard, allows fellow Raven Guard jump pack units to reroll their charge ranges, helping your Assault Squads, Vanguard Veterans and Inceptors close the distance on key enemy units.

Reivers, on the other hand, are a versatile and powerful unit in a Raven Guard army and function well with other assault units; they’re almost as mobile as jump troops with their grapnel launchers and grav-chutes, with some handy abilities like Terror Troops and shock grenades. If you want to make your own Raven Guard characters, their unique Warlord Trait, Silent Stalker, prevents enemies from firing Overwatch, while the Raven’s Fury Chapter relic allows a jump pack character to move at blistering speeds and reroll charge ranges – combined, you’ll have a potent and deadly character assassin. 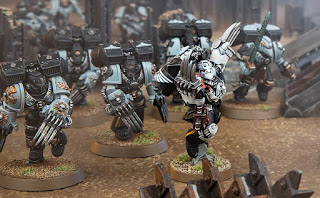 One of the most exciting new features of the Raven Guard is their unique Stratagem, Strike From the Shadows. You’ll want to pack as many command points as you can into your list to take full advantage of this, allowing you to hold units back at the start of the game and deploy them anywhere more than 9″ away from the enemy just before the game begins.

There’s a huge range of ways to use this; getting a group of Hellblasters or Centurions into a strong firing position, setting up a devastating first turn charge with an Assault Squad or Inceptors, or just forcing your enemy to deploy defensively. As this rule is tied to command points, you’ll be able to choose how you use it – in some games you’ll want to deploy lots of your army with Strike from the Shadows, while in others it may be beneficial to hold some points back for a crucial re-roll, or another Stratagem like a flyer-busting flakk missile.

With the new codex out soon, your army won’t have to wait in the shadows much longer. In the meantime, now is a great time to pick up Kayvaan Shrike to lead your own Raven Guard army. Make sure to come back tomorrow for another sneak peek at a Chapter from the new codex.