Sweep These Under the Rug Please. 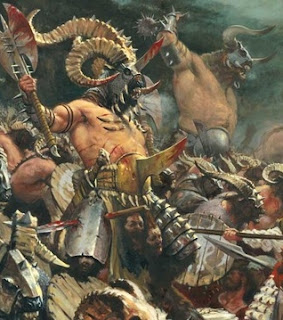 This is one of those nights and I keep getting emails about this rumor bit. So let me throw it down and move on, because this one is just a mismatch of someone on Dakka throwing stuff down to see how far it will go. This is all from a week ago, and I keep seeing it broken up and rehashed in different forms in various places.


First off..... No Beastmen or Brettonia are being discontinued. That should be all you need to see on this, and yet like vomit in my throat, it keeps coming up. Normally I like to stay neutral on rumors, but this one keeps coming up for air.

Did I mention add a little salt. If you have read this broken apart into two or all together elsewhere, please add salt to it. Just in case you need me to be a little more blunt; I am only posting this so that it can be laid to rest.

Confirmed
New Dwarves infantry - and new character model (Fire-Slayer King)
Chaos (Fantasy) gets new kits (Tzeentch focused).
1. New model for Kairos Fateweaver and Lord of Change (similar size to Bloodthirster with multiple options of a staff or strangely mutilated spear/sword)
Slaneesh products will be minimised - not sure if GW has decided to erase Slaneesh from the fluff entirely
Beastmen models to be discontinued by end of 2016
Brettonia also to be discontinued (no confirmed date)
New Elves unit

There was also a possibility of bringing back a renewed version of an old Dwarf war machine with axes. Model design is apparently completed but no confirmations on release


Just to add on to what nightshae007 said, and to be complete. He goes on to say the following.
The guy I got the info about AoS worked at GW, but with 40k. He picked up some rumours and stories about AoS and I had a chat with him. I only dug up rumours that were similar to his story.

I can confirm that LOC is coming. The guy confirmed that LOC will be a centrepiece model much like Nagash or the Bloodthirster. GW gained an incredible amount of profit from the Nagash and the Bloodthirster model. The reason why they're currently focusing on releasing "Large Centrepiece models" as well as HH is because GW fans are willing to spend a buttload of money to own such impressive kits. I believe the Bloodthirster kit was originally made in 2013(?)-14(?) and was originally planned to be released until GW came up with the idea of the End times.

He also mentioned that HH will enter GW's range depending on the profit GW earns from the Betrayal at Calth.

and This
All of you think that GW has a definite planning for next year - that's an incorrect assumption. What GW does (like many other companies) is that they only have a preliminary plan- Release of product A, B, C will occur this year. If I am correct, their preliminary plan only stretches out from 2 to 4 years. Every year they take the preliminary plan and modify it right before another release. E.g.

(The example below is purely an example)
HH didn't sell as much as we expected - Maybe we should hold HH products for a few more years. Thus, though they have "new kits" ready to be released, they won't be released for the next few years.
Sanguinus is a good example. Model ready and confirmed. Release is probable- but will GW sell it next year is what you're arguing about. Only GW knows.

Despite what you may hear, AoS shouldn't have existed. When 8th ed was released, GW planned to have 9th released in 5 or 6 years. Once they realised, 8th was dying and sales declined dramatically, they rebooted the whole game into AoS. Sales rose with the event of the End Times. When people showed interest into the Nagash kit, they released other "big kits" which were ready since a few years back.

This applies to all releases in GW. High sales? Great - let's take this to a whole new level. Either release of same limited kit in a few years or keep on going with the big kits. Low Sales? Either ignore it or give it the AoS treatment.

Right now, GW has a ton of new kits awaiting for their release. LOC and dwarves ARE confirmed. LOC was developed at the same time around the Bloodthirster kit, only question was when GW would release it. The Glottkin was supposed to be a GUO model, but with the end times it became a character model. Plastic plague marines - development in process, but with the success of HH, it could easily be pushed back to 2017 or even 18. Discontinuation of Brettonian and the Beastmen models doesn't necessarily indicate that GW will give it the Slaneesh or Squat treatment. Bretonnia could receive new models which they haven't got in decades. Only question is if people are willing to buy the new version of Bretonnia.

CSM confirmation was promised ever since the start of 2015- GW knows the current codex might need a few tweaks. Only reason they haven't done it is because of End Times and the development of HH.


Overall, future releases are dependant on how many people will buy and what they want. Right now, old games e.g. Necromunda etc. are said to be underway. If this is true, expect another delay. All I'm giving you is the basic preliminary plan told by the GW and FW insiders. Whether or not if you decide it to be gak, that's your choice
12/13/2015
Natfka
40k, 7th Edition, Age of Sigmar, Rumors