Next Weekend: 40k Battleforces and Necromunda 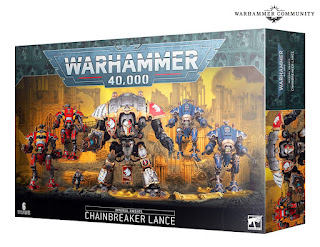 Check out what is on the agenda this coming weekend. 40k Battleforces and an array of Necromunda releases certain to be on the Christmas list.
via WarCom
https://www.warhammer-community.com/2022/11/27/sunday-preview-warhammer-40000-battleforces-and-necromunda-goons-and-goodies/
Battleforce: Adeptus Mechanicus – Elimination Maniple* 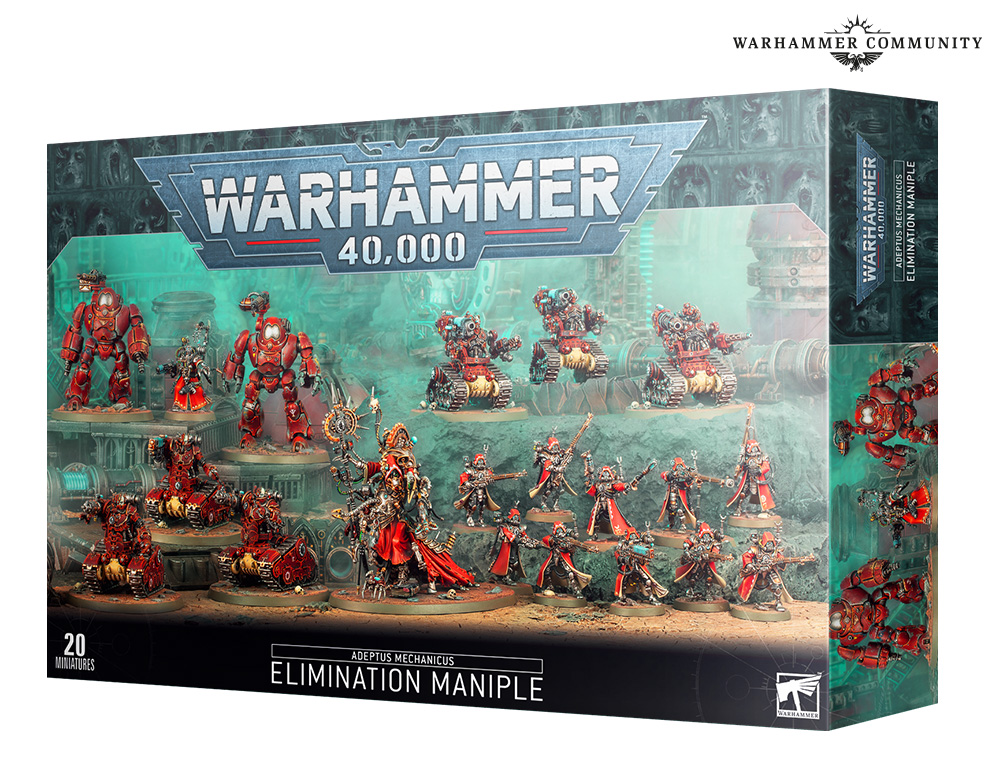 Belisarius Cawl has packed himself up in a battleforce that’s full of surprises. And by surprises, we mean horrible guns and killer robots from humanity’s past. This box comprises 20 miniatures, including the Archmagos Dominus himself and more than enough death-dealing cyborgs.
Battleforce: Imperial Knights – Chainbreaker Lance* 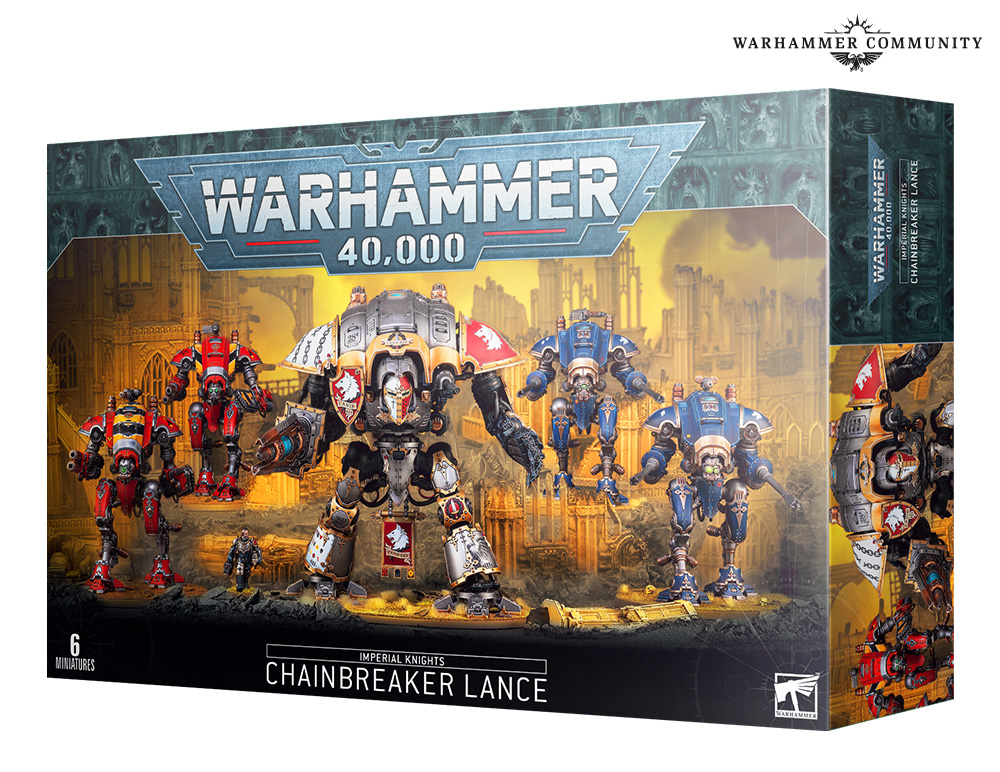 This clutch of Knights is a perfectly sized army project – it’s just a handful of miniatures, after all… The Chainbreaker Lance contains four Armiger-class knights led by Canis Rex, a legendary steed piloted by the equally epic Sir Hekhtur. For those of a less Freeblade persuasion, Canis Rex can also be constructed as any Questoris-class Knight.
Battleforce: Thousand Sons – Court of The Crimson King 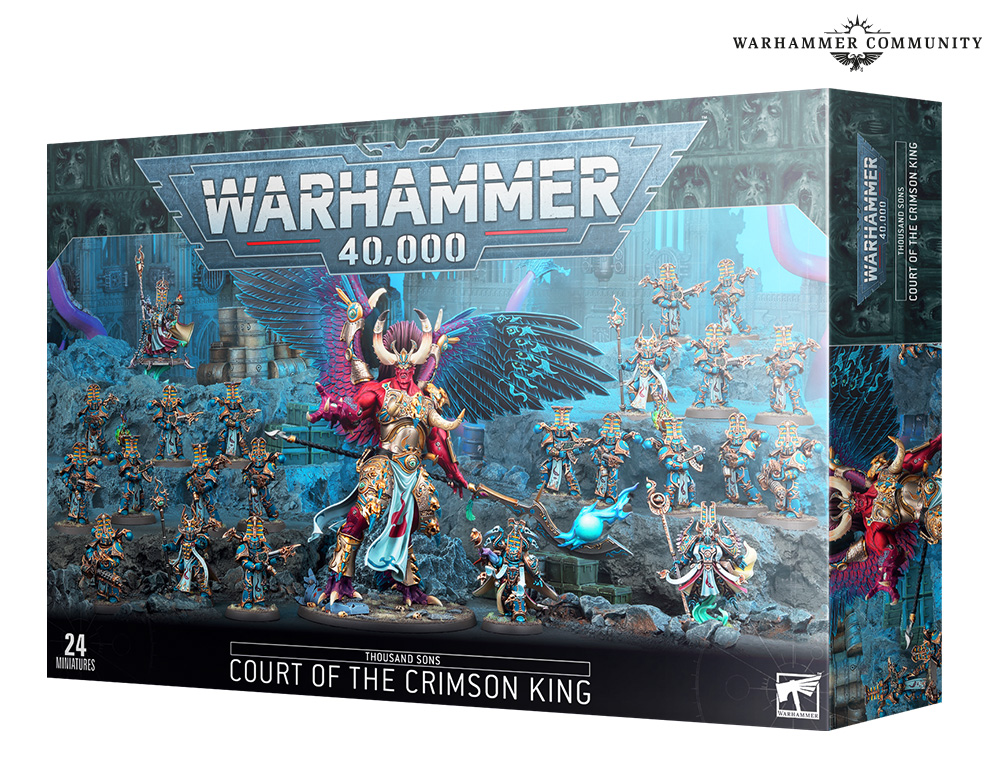 Magnus the Red is the 41st Millenium’s premiere big scarlet-skinned chap, at least until his very angry brother turns up. Joining him are 23 of his sons – 20 dusty Rubric Marines and three Exalted Sorcerers living their best arcane life.
Battleforce: Death Guard – Council of The Death Lord 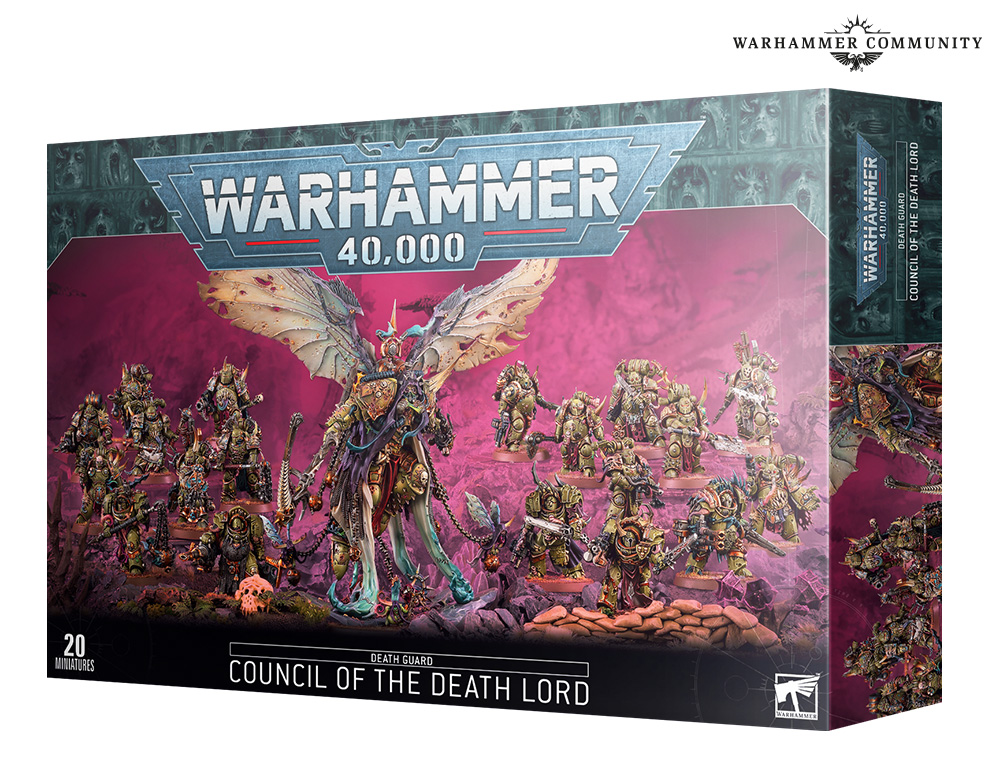 Refusing to be outdone by his brother – magicians are always putting on a show – Mortarion arrives with a rotten assortment of Death Guard. 14 Plague Marines invite double blessings from Nurgle, while the Pale King has even snuck in a clutch of indomitable Blightlord Terminators.
Battleforce:  Adepta Sororitas – Sanctorum Guard

Anyone who had nuns in big metal jumpsuits on their Christmas bingo card is going to be rubbing their hands with glee at the Sanctorum Guard battleforce, which contains 23 saintly miniatures. Morven Vahl spearheads a cohort of six Paragon Warsuits, while a complement of Celestian Sacresants and a Battle Sister squad give you more zealots than you can shake a brazier at.
Battleforce: Adeptus Custodes – Watchers of The Gate 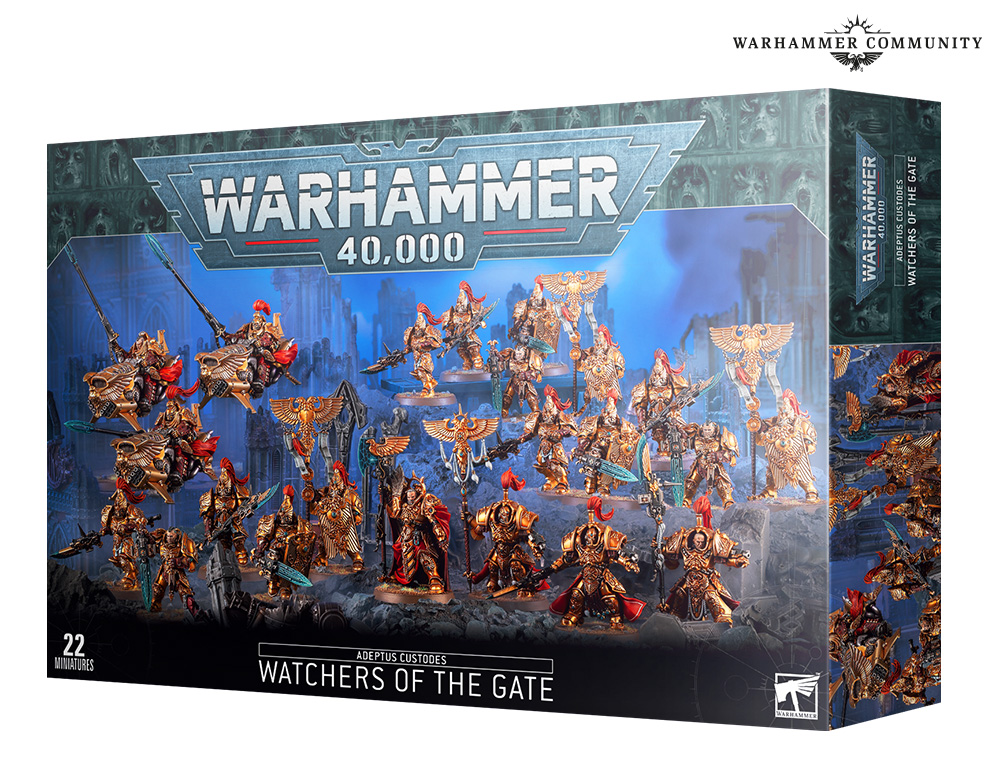 Our true love might have given us five gold rings this year, but it’s not a patch on this auric battleforce absolutely packed with 22 Custodes – including Captain-General Trajann Valoris, who is kind of a big deal. This absolute wall of warriors features the Vertus Praetors on their roaring dawneagle jetbikes, adding valuable tactical flexibility.
Battleforce: Imperial Fists – Bastion Strike Force 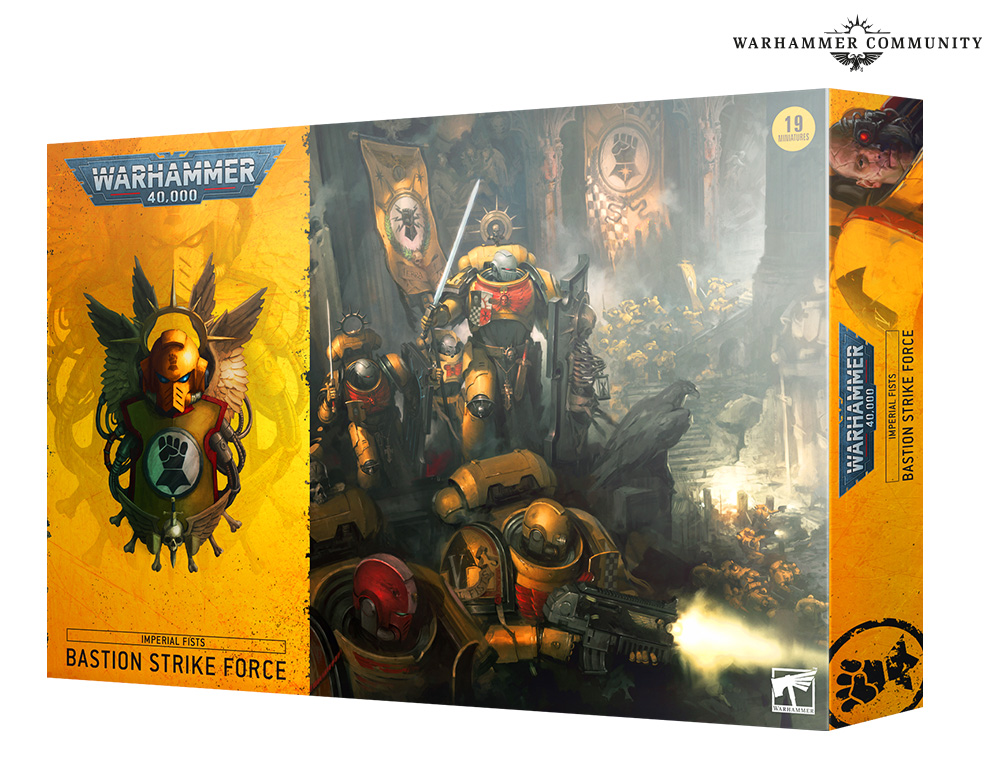 Fans of chunky Gravis armour have 19 reasons to be happy with this Imperial Fists battleforce. Tor Garadon is backed up by the full faith and credit of 15 Heavy Intercessors, three Aggressors, and two Imperial Fists upgrade sprues.
Battleforce: Raven Guard – Ravenstrike Battle Force 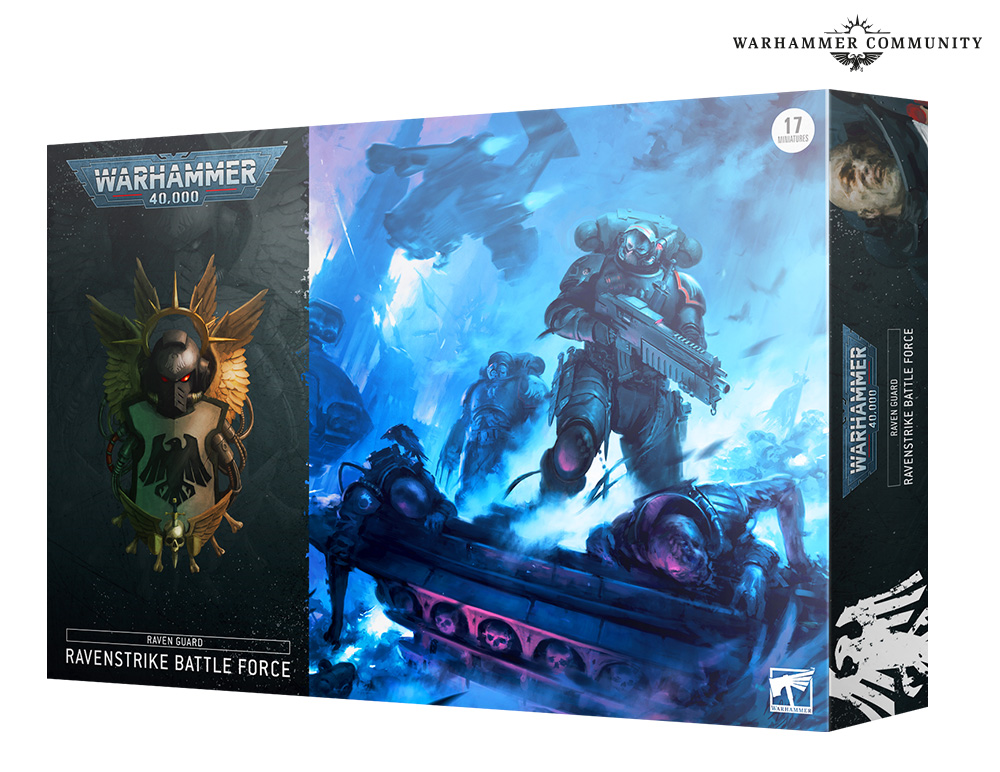 It’s hard enough to be stealthy when you’re a nine-foot tall super soldier, but how about the challenge of going covert with not one but two Invictor Tactical Warsuits? If anyone would know how to pull that off, it’s Raven Guard Chapter Master Kayvaan Shrike, who also leads a squad of Reivers, a trio of Eliminators, and a Phobos-armoured Librarian for a total of 17 miniatures ready for an ambush.
Adeptus Mechanicus – Technoarcheologist 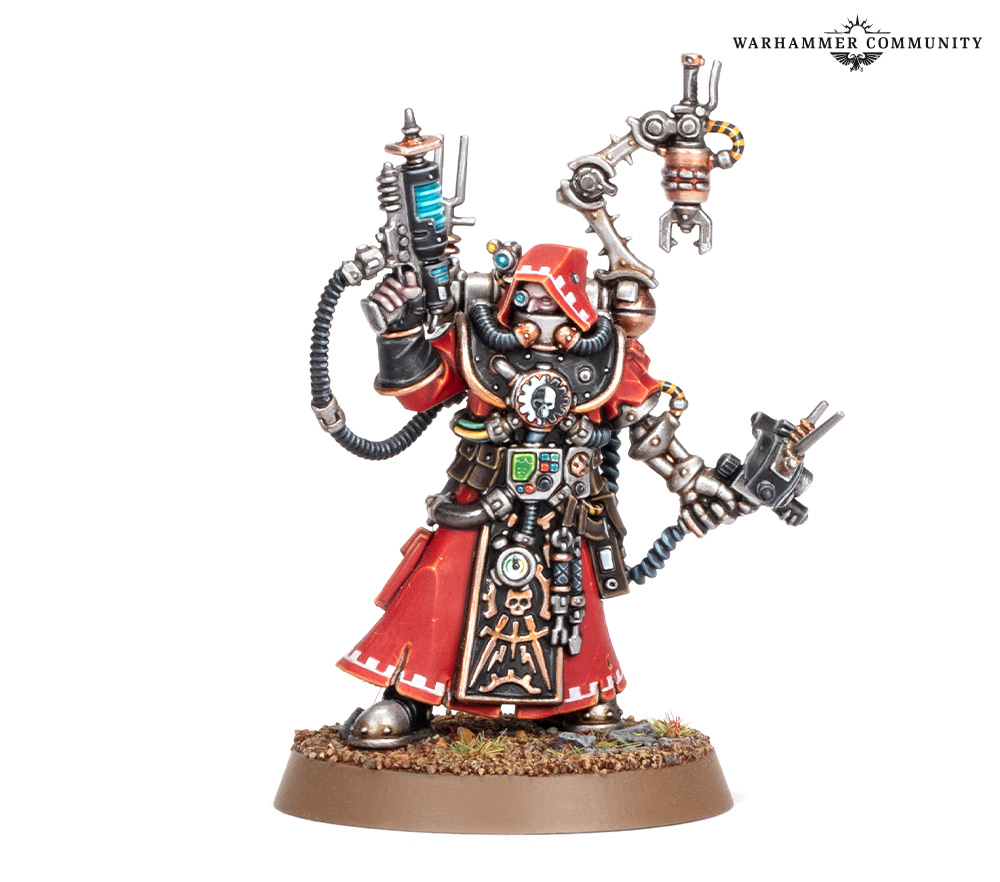 The Technoarchaelogist – once seen in the Escalation expansion for Warhammer Quest: Blackstone Fortress** – is being released on his own for the first time. An HQ choice for the Adeptus Mechanicus, these bold explorers specialise in keeping units shooting while they search for artefacts – they can even guide Servitors through more complex field research. And with six Kataphrons in the Elimination Maniple box, this pistol-packing surveyor is the perfect companion piece.*** 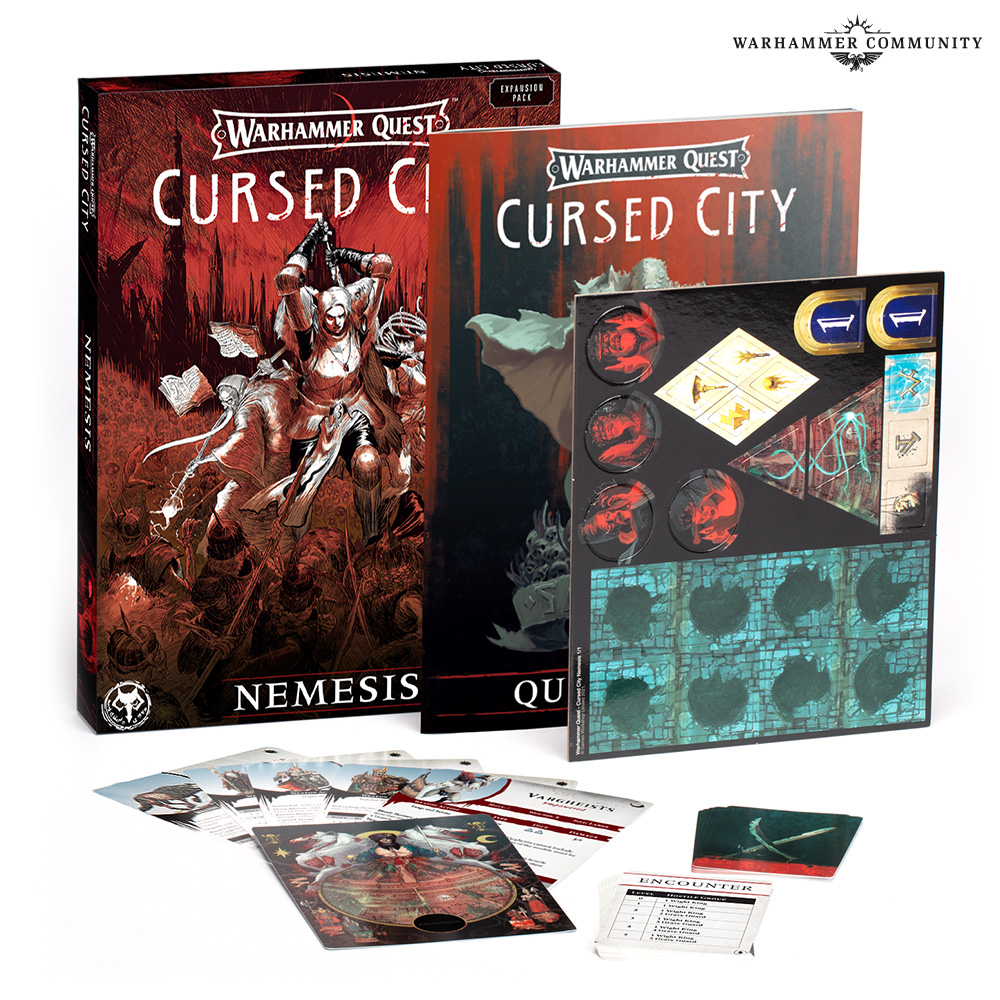 The quest to save Ulfenkarn comes to an end with the final expansion for Warhammer Quest: Cursed City. Nightwars will bring your heroes’ gruelling journey to a close with new quests, new enemies, and new ways to use your Soulblight Gravelords collection. You’ll need the previous expansion, and the required miniatures to play. 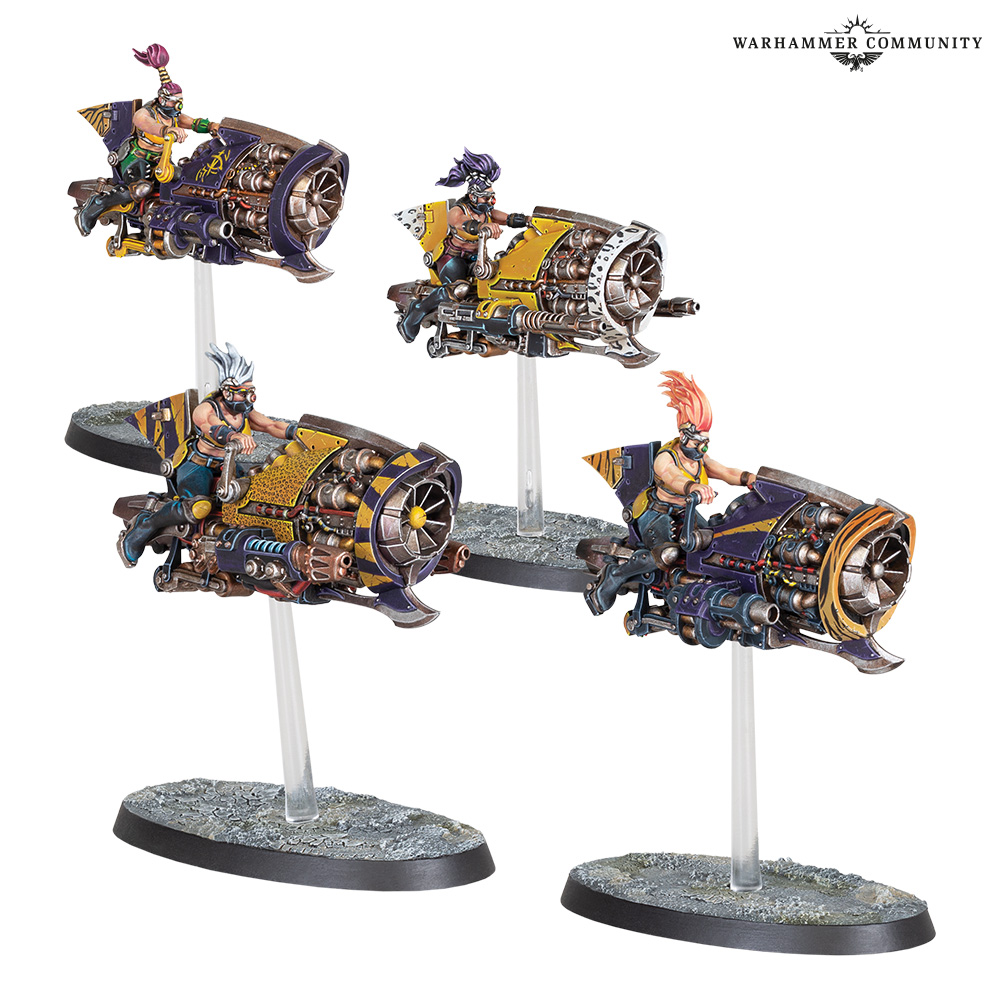 Dominate the ash wastes with these new skimmer mounts for Escher gangs. This kit includes four fast-flying machines which Leaders, Champions, and Prospects can ride. There are head and hair options for the riders, along with a choice of twin-linked heavy stubbers, grenade launchers, or plasma guns.
You can find rules for using Escher Cutters in The Aranthian Succession – Cinderak Burning.
Escher Tactics Cards and Ash Wastes Dice 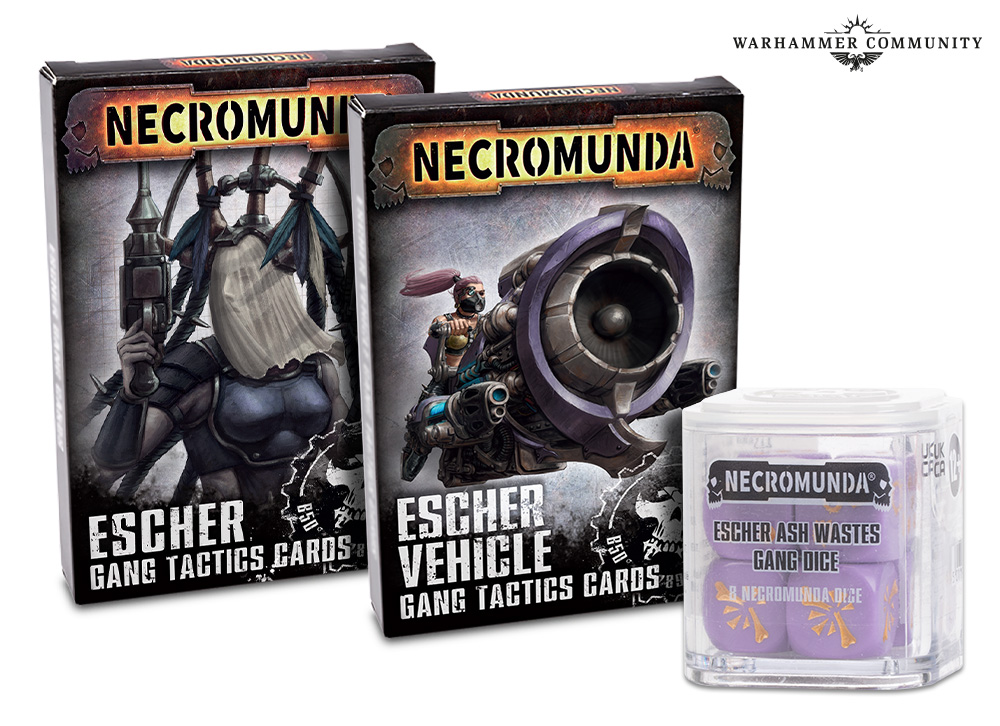 There are two sets of Escher Tactics Cards coming out – one for vehicles, and another for your battles in the underhive. Both contain 18 Escher-specific cards and eight blank cards to keep track of your gangers and vehicles. The Escher Vehicle Tactics Cards contain new cards to use in the ash wastes, while the Escher Gang Tactics set is a reprint of a previous set, and the eight Escher-themed dice are coloured in stylish purple with luxurious golden ink. You get three regular D6s, three Necromunda injury dice, an ammo die, and a scatter die.
Necromunda: Athera, Blade of the Matriarch 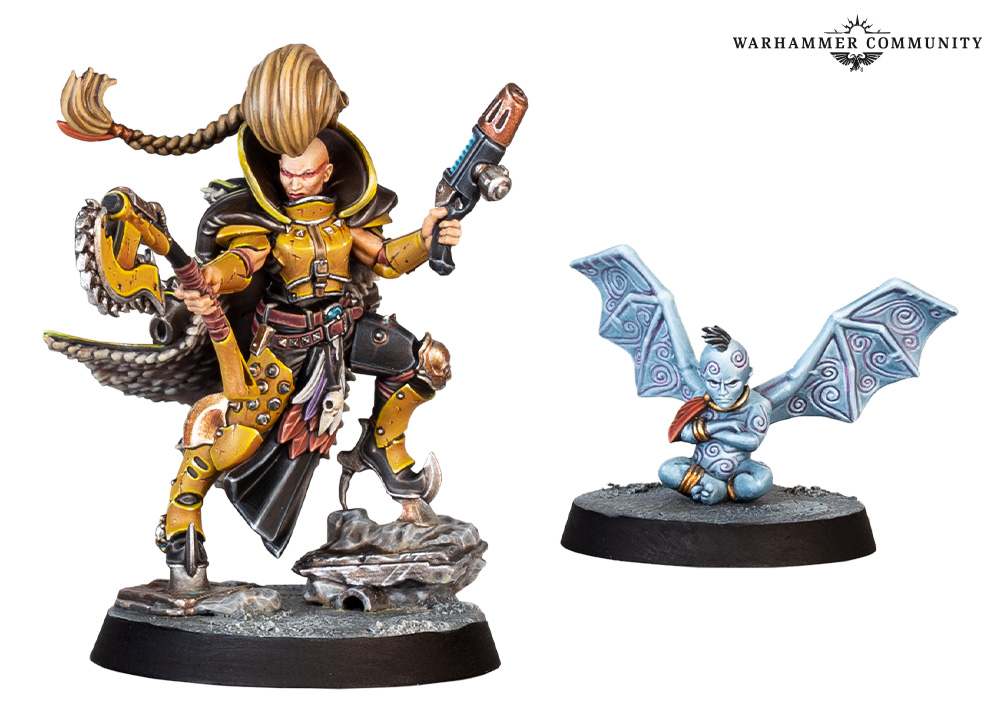 Forge World is returning to Necromunda with some new and highly detailed resin kits, starting with Athera, Blade of the Matriarch. Escher gangs can petition her for help in slicing up enemy gangers with her master-crafted chainaxe. Athera is accompanied into battle by her grumpy Caryatid, Stix, who has the prescience to help them both avoid harm.
Necromunda: Escher Shivver and Apprentice Clan Chymist 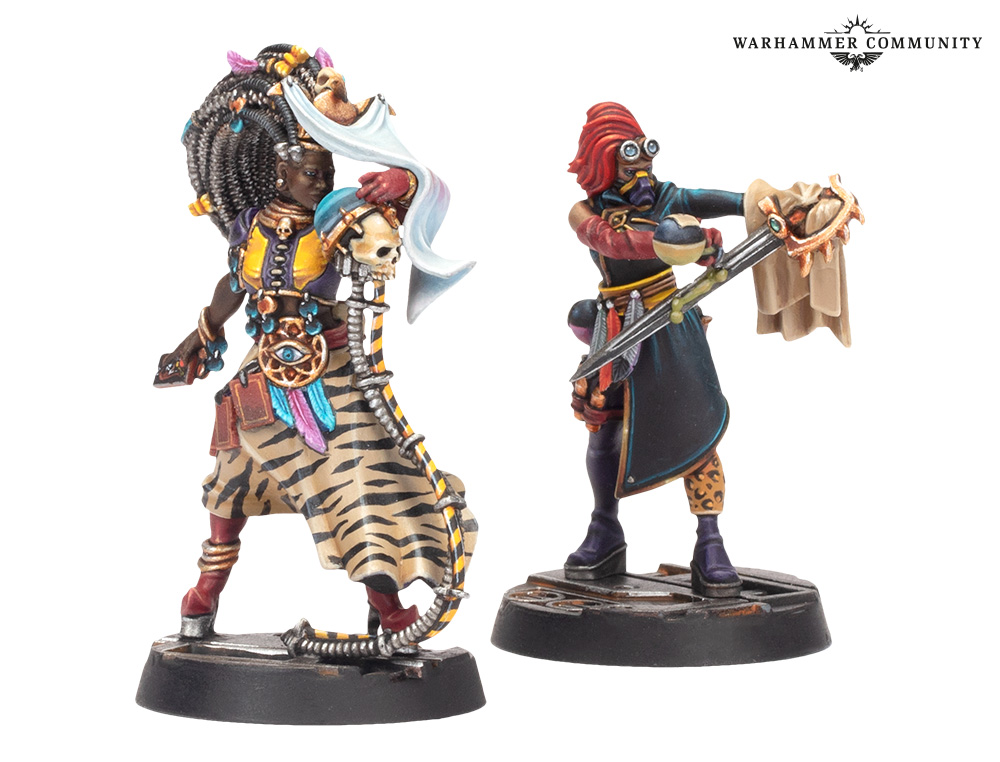 Add extra support to your Escher gang with the Shivver and Apprentice Clan Chymist, a pair of gang-specific resin Hangers-on. The Shivver can see into the future and predict great glory for your gang members. Chymists, on the other hand, reduce the cost of Chem-Alchemy Elixirs and may even turn deceased Matriarchs and Gang Queens into Death Maidens.
Necromunda: Gorshiv Hammerfist 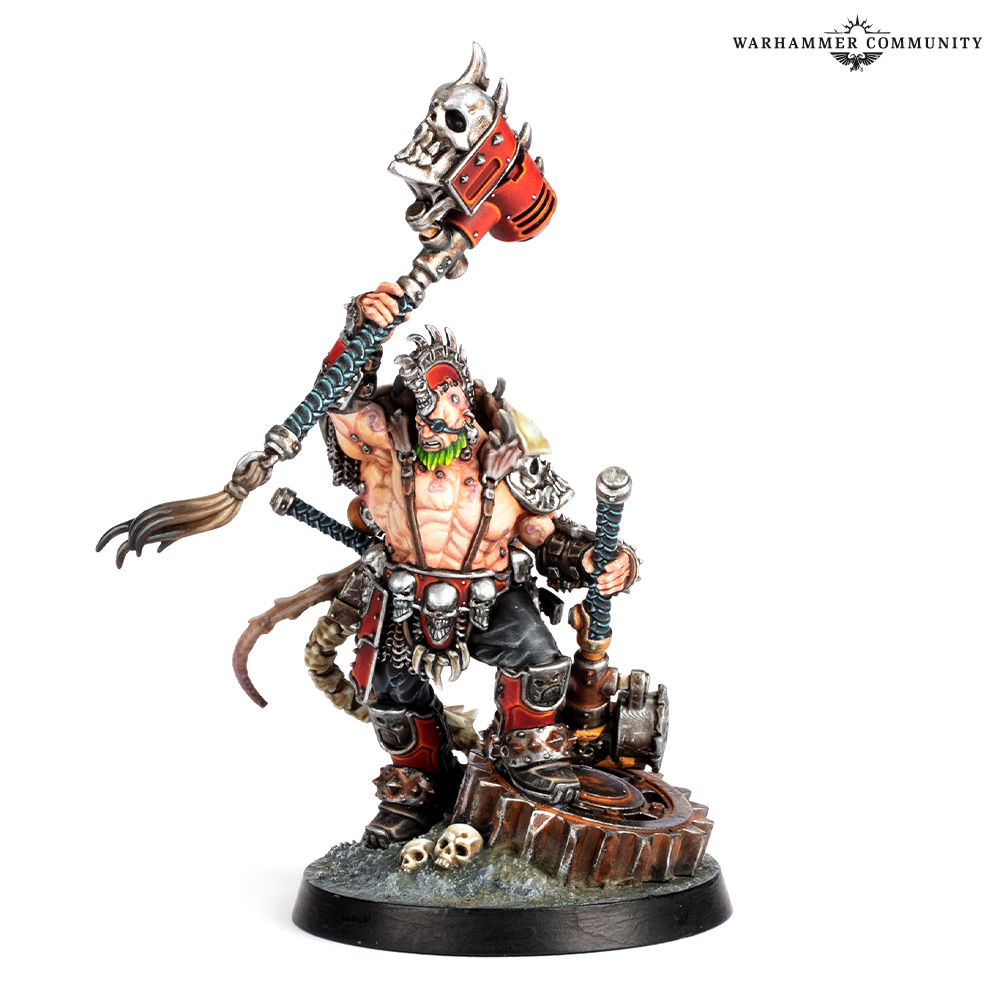 The biggest slab of meat in the Underhive is here, and he’s called Gorshiv Hammerfist. Made of resin and armed with the appropriately-named power hammers Wrack and Ruin, he’s ready to guzzle his stash of combat stimms and pulverise some fools. He’s the perfect hire for any Goliath Gang that wants to add yet more muscle to their roster.
Necromunda: Escher Ash Wastes Upgrades 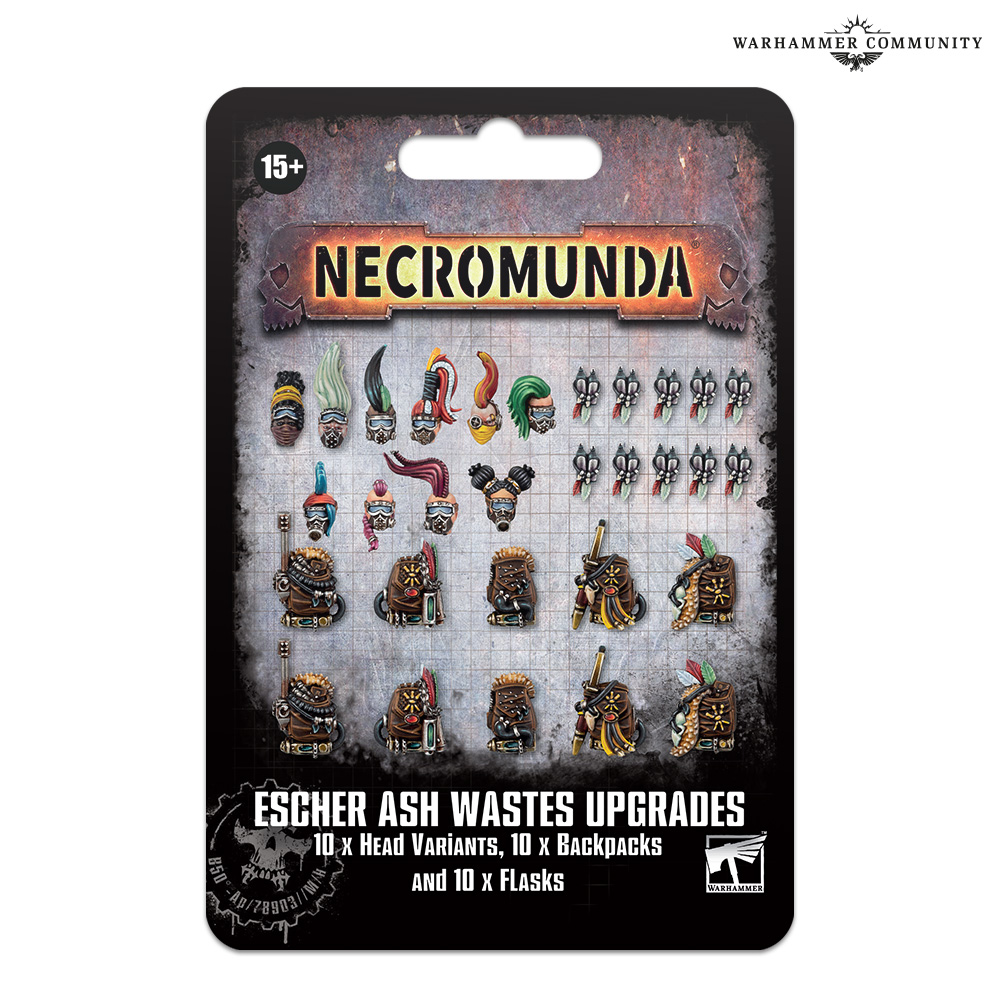 Get your Escher gang ready for the ash wastes with a resin upgrade set containing 10 new heads, 10 backpacks, and 10 flasks that pair wasteland utility with that tried and tested Escher flair.
Necromunda: Underhive Traders 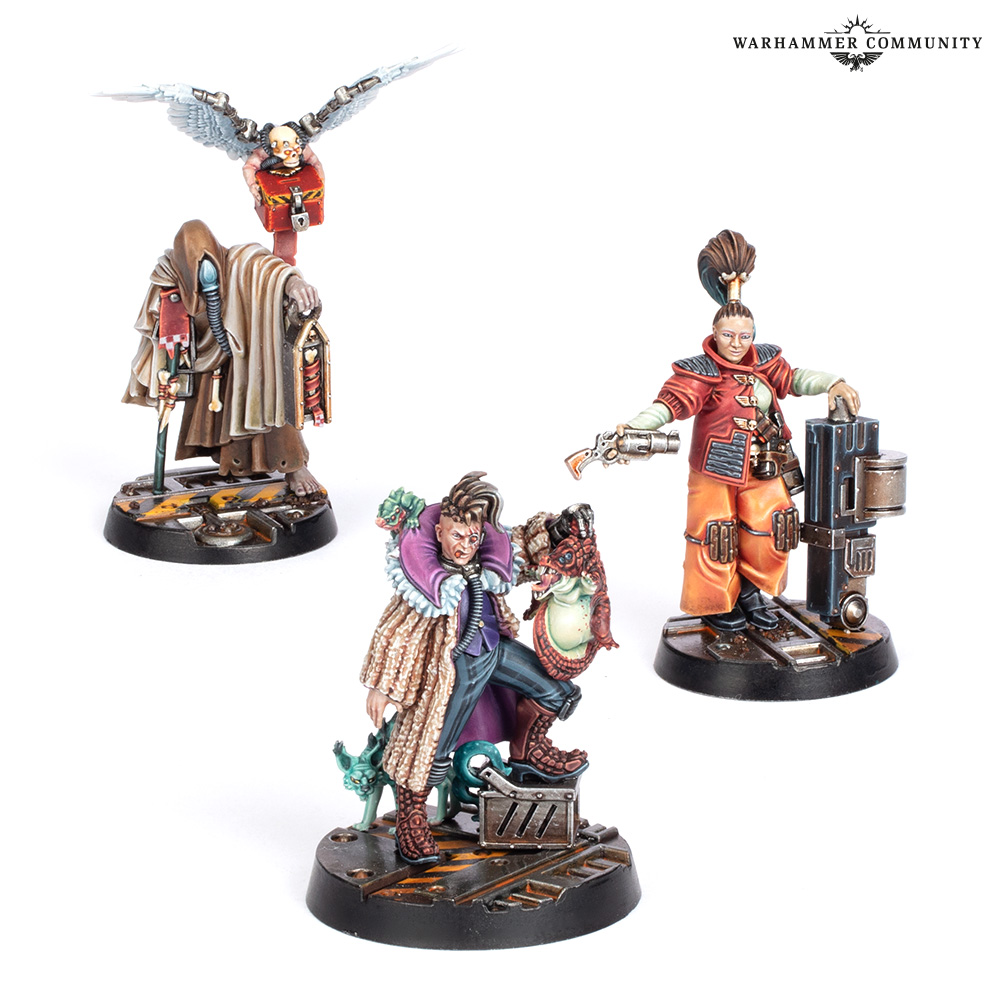 There’s pretty much nothing you can’t buy on Necromunda, if you’ve got the credits… except maybe an escape from the gang war. These haggling Hangers-on are well versed in the art of the deal – and with a Relicmonger, Gun-smyth, and Beastwrangler in this pack, your gang is going to be well stocked for that civil war that‘s thundering over the horizon. All three are made of resin.
Necromunda: Chronos Pattern Ironcrawler 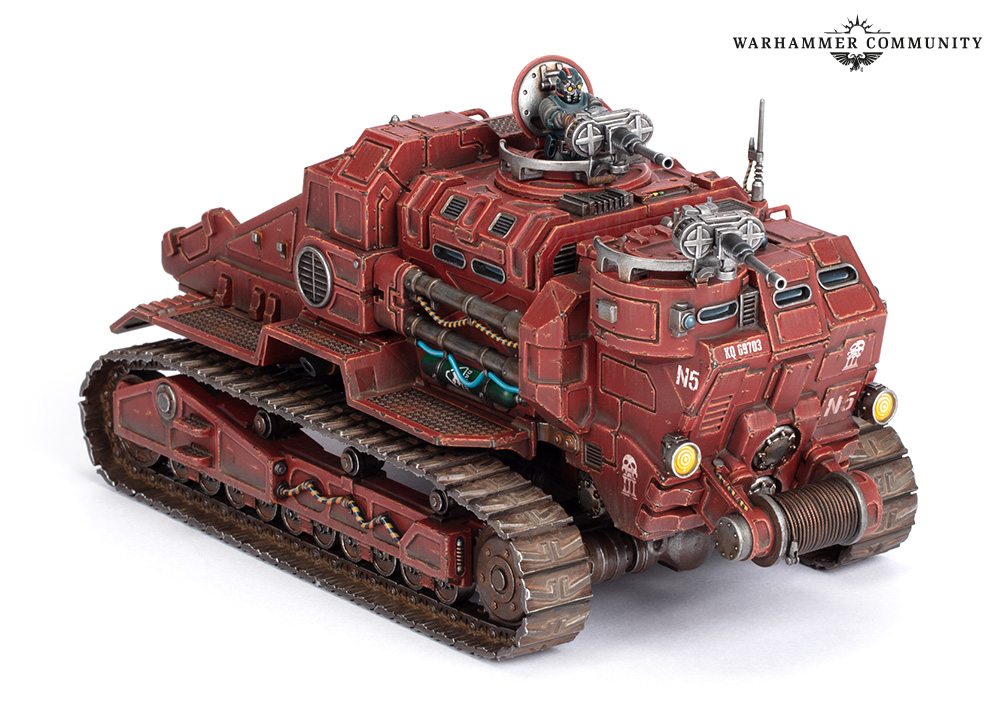 Navigating the ash wastes is a real pain – and not just because of the lethal weather conditions and bloodthirsty gangs that roam the dunes. The outlands are littered with difficult and dangerous terrain that cracks axles and gums up drivetrains. Luckily, any gang can conquer the wastes when mounted in a Chronos Pattern Ironcrawler, a tracked beast outfitted with hefty armour. This is a hybrid plastic and resin kit, based on the Cargo-8 Ridgehauler.
11/27/2022
Natfka
Necromunda, Warhammer 40k