Latest Update 12.08.2021
Eldar rumors, leaks etc. Including Old World information and more.
Here is a pretty big compilation of rumors that include this month and the next proving that many of these are happening. This is worth pinning along the right hand side of the site so we can watch these things as they approach. 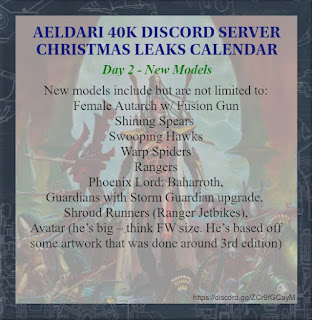 via a reliable source on Faeit 212

there exist plans to merge AT and AI into a Game like Epic but Covid and
the caused release backlog with all it's issues slow this down (same with
Gothic or other specialist games).
There're exist also plans in the drawer for expansion(s) to introduce
airplanes, tanks and infantry as rudimentary support options (does someone
remember that PC Game for AT?) but this is possible halted.

via excellent sources on Faeit 212

Hi Gary,
a little statement about Adeptus Titanicus.
Whatever People tell, AT will not de discontinued. It's the best running
specialist game, even more than Bloodbowl.

This was sent in by a very solid source. Not usually so cryptic but perhaps I am just missing the references. A specialist game that would be a big announcement? Epic?

A little Fogheles twittered me:
Big announcement for specialist games next year
Something "big" is coming
Also HH soon(TM)
"Merry it is when Summer ye last, with Fogeles Song" 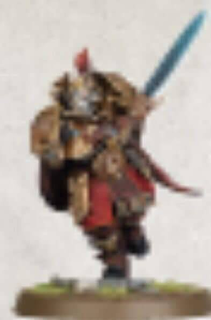 via Chapter Master Valrak
Did a video for anyone interested but will list what I was told by a source whom I trust
Chaos new models:
Eldar:
Again make of this what you will be this source has not been wrong yet.

'Heard third-hand from the same person that provided me with this rumour; to be digested with the usual pinch of salt.

A massive, but incomplete, update of Eldar

Without a specific date but in the pipeline:

Astra Militarum with veteran-style Cadians. Two new regiments are also in the works. New Kasrkin and new vehicle, designed to fit between the Leman Russ and the Baneblade.'

The Sword Brother kit will have plenty of CC options and the option to make a Marshal (like with the Custodes Warden kit that gives you the option of making a Captain).

There will be two Crusader Squads: the old one that everyone knows and a new one made up exclusively of Primaris. The latter will be 5-11 Primaris Initiates, 4-8 Primaris Neophytes, and 1 Primaris Sword Brother. Neophytes will have 2 W and 2 A like other Primaris.

There'll also be a conversion/bitz/upgrade sprue that will have Templar relics on it (so-and-so's helmet, the sword of such-and-such, etc.), shotguns for Neophytes. and more customisation options like extra arms (Neophyte holding a helmet), or backpack-mounted candles. There will also be a multi-melta which will become a BT vehicle option. It'll replace the stubber on Primaris vehicles.

There will also be a Kill Team box with Sisters Neophytes (new kit and unit entry) vs T'au Pathfinders (upgrade kit) with existing Imperial city terrain.

Custodes and Genestealer Cults with a box, similar to the Hexfire (TS v GK) one, containing both factions, with a new character for each: GSC Saboteur and Custodes Lieutenant.

From the 4chan leaks/predictions guy that was right so far this year.'

Here are all the summary leaks of the last few days. Yes there 3 different leaks but I'm sure you will find them interesting atleast 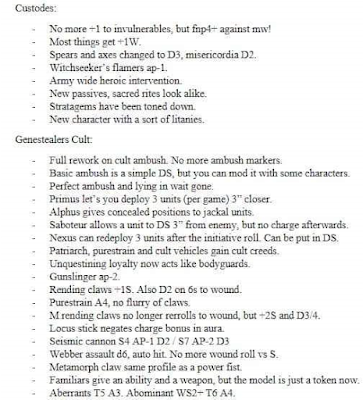 Massive section via Bolter and Chainsword via  Juggernut and others here:

> Are the Kill Team Octarius box orks/DKoK gonna be re-released separately? If so when?
Soon™ (Probs within 2-3 months)


> Will GW ever switch to dropper bottles?
Not for their regular paint range, pots are easier to use for yung'uns.
I have it on good authority that the 'air' paints will be put in dropper bottles at some point in the next year.

>New Eldar releases?
I don't know much. I know the Codex is in production because lore sections were sent to translators. The rumour engine is definitely the Avatar of Khaine though.

>Any models getting their prices lowered?
This may surprise you but there is going to be a regional repricing once a few logistics things are actual sorted. The AU, NZ, and JP prices are set to come down a bit and be more in line with Europe.

>Are the Warhammer Plus animators being treated well?
They are on good money, a pretty high pay banding. I can't speak for conditions however.

>will battlefleet gothic ever get a reboot?
Nothing on my radar.

>why is Kill Team so overpriced and how bad is the price gouging/milking going to be with future releases?
Eh, I think the price of KT boxes and models is fine.
However, I think our book pricing is egregious and needs to come down.

>are truescale firstborn marines ever happening?
No.

Nothing on my radar [on changes to us and CA prices]. Apparently, the concern is that regional high pricing due to shipping and import nonsense is impinging on the growth of the hobby in AU, NZ, JP and the company is looking to mitigate that,

It isn't Coat D'arms [that make the older brushes].
It is a small firm that isn't well known and they are family run. I am not revealing the name as I don't want "/tg/ BOYCOTT GW " sending them

. This has soured relations with partners in the past.

>do you have any news on upcoming video games or why darktide got delayed?

No idea on Darktide.
Licensing is finally trying to expand away from mobile games and are looking at AAA games with PC and console releases.

>to add to this anything about the upcoming killteam boxes?
Tau and Sisters are getting a box. Also, there will be a new Harlequins unit released through the Kill Team line.

>Was it true they were testing the waters with titanicus to gauge interest in an Epic 40,000 re-release? Is that canned along with Adeptus Titanicus?

I was under the impression that Titanicus and Aeronautica were going to "dimensional merge" into a new epic. Not happening now lol.


>Will we ever get non digital good art again?

A lot of our art is still analog, look closely.

>Is there ever any talk about 3dprinting cutting into profits or threatening the company? What about legal

with other companies producing totaly not GW models, theres still loads around doing exactly what chapter house did.

Not really. We know 3d printed alternative models exist but it's something that less than 5% of hobbyists actually partake in. They also tend to be the most loudmouth cancerous :cusss so it's quite nice not having them come to our stores.

As for parts etc, keep an eye out for the future, you may see 3rd parties being partnered with to produce shoulder pads, conversion kits, customisation accessories in the future. An idea that is on the table and being pretty heavily debated at the moment.

>Will it still be Terminators?
Yes, with a twist on the Tyranid side.

>And if so which chapter?
Any chapter you want babe.

>What's the general reaction to the reddit boycott from GW?
>How do company reacted to backlash due to recent IP infrigment changes?
Kill Team numbers are looking good. The fact is that we are quite happy for the "REEEE Boycott GW!!" fandom crowd to just remove themselves from the community. Improves it for actual hobbyists.

>How is Necromunda doing?
Fine

>Is Titanicus really going to be squatted?
Apparently

>Anything going on with Heresy?
November


>Are Guard getting new sculpts?
A few new models

>Are Eldar getting plastic aspect warriors?
Yes, 2 or 3 types with the codex, rest to come out through Kill Team.

>Is the Khaine set going to be CADnightmare or kino?
No idea.

>Are Catas being squatted?
No.

>Are we getting a new Primarch for the loyalists?
>Any possibility of seeing Vect coming back to the table?
Not heard anything

>Are Harlequins going to get updated or be rolled into craftworlds like scions into guard?
The codex merge is bull:cuss.

>Is Aeronautica dead in the water?
It breaks even, probs not getting any more after latest wave.


>What army is selling the worst in 40k and AoS?
40k is Genestealer Cults by a wide margin. AoS it is probs Deepkin but not by much.

>Can you tell us something in the new black templars codex that will signal you are not just larping?
Emperors Champion can give invul save through an Aura.
Crusaders can deal lots of mortal wounds.