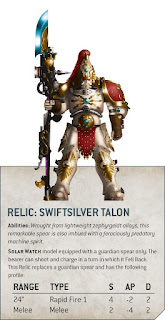 With Shadow Throne coming and the codex being released early next year we are seeing another preview for the Adeptus Custodes and the options you will have for your army.
via WarCom

Shield Hosts will be familiar to fans of Adeptus Custodes, but they’ve had upgrades befitting these golden demigods of destruction for the latest edition. There are six in total, including favourites like the Solar Watch, and each has access to unique fighting styles, warlord traits, stratagems, and relics of Terra.
No matter which Shield Host a Custodes is pledged to, they are all first and foremost servants of the Emperor, so you can always fall back on the Emperor’s Chosen Shield Host.* 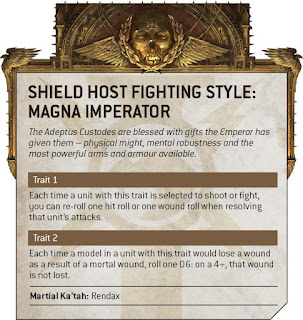 The template for every Shield Host, the Emperor’s Chosen gain the Magna Imperator fighting style.
This means access to two different traits and a preferred Martial Ka’tah, in this case, Rendax. These powerful stances are adopted as the game progresses, giving you a different choice of an army-wide bonus every turn. Each Host has a preferred Ka’tah, which unlocks additional benefits. 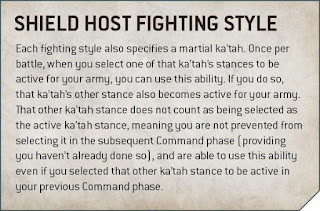 If you activate one stance of your Shield Host’s preferred Martial Ka’tah in the command phase, you get the benefit of both stances. The stance you didn’t pick may then be used in the next turn – which makes for a potent two-turn combo.
The Dread Host is a great example of how all this works. They specialise in the Dacatarai Ka’tah, making them monsters against hordes. 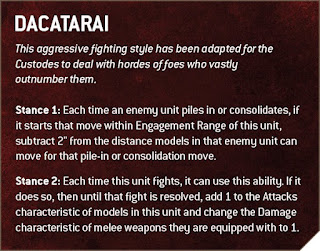 If you invoke the Dacatarai Ka’tah as the Dread Host, you can activate either stance at the start of your turn but make use of both. If you then choose to stay in Dacatarai next turn, you may still activate stance two, even though you’ve already had the benefit.
Their traits give them access to increased Armour Penetration and more chance to guarantee those vital charge moves. 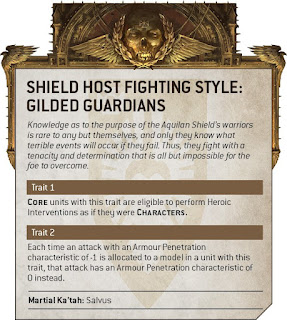 Pick this shield host when you absolutely, positively, want an enemy force incredibly dead.
And that’s not all. Each Shield Host has its own stratagem, such as the Aquilan Shield Host’s ability to close ranks around vulnerable characters – perfect for keeping those slightly squishier Sisters of Silence characters alive. 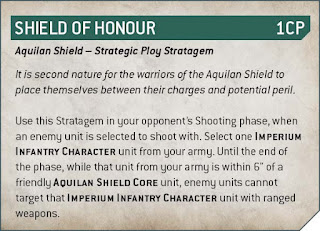 The Solar Watch live up to their swift and merciless reputation,** with a Warlord Trait that lets you get all up inside the business of an enemy force before they can react. 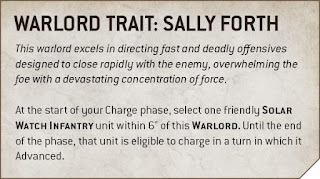 Their Swiftsilver Talon relic exemplifies their rapid fighting style, a lightweight weapon that compels its bearer to acts of expeditious violence and makes them more mobile. 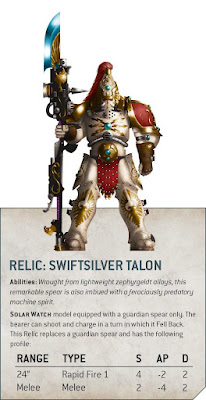 These legendary heroes will soon be battling the perfidious Genestealer Cults in Shadow Throne, and both codexes will follow shortly after.