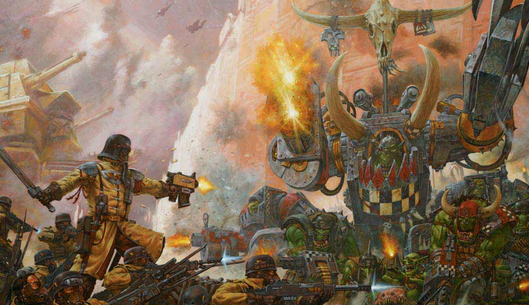 While we are waiting patiently or not for a codex for the Orks, there is apparently a codex supplement of some kind also waiting for a release date. The supplement is called Waagh Ghazgkull, and I imagine that it would be released soon.


Please consider this a rumor.

via DarkWarrior1981 on Warseer
I just recieved word from someone who works for GW (higher up, not a red/black shirt), that there will be a codex supplement called Waaagh Ghazgkull. Obviously, themed around the warboss we all know. The book is listed as codex orks supplement, but it is unclear at the moment, if it will be like Clan Raukaan (so you need the codex), or standalone linke Militarum tempestus. It will be released soon, I assume shortly after the codex. It appears, that both books are already in the warehouse waiting for the day of release.
6/10/2014
Natfka
40k, 7th Edition, News Headlines, Orks, Warhammer 40k