Nemesis is the Final Expansion for the Cursed City 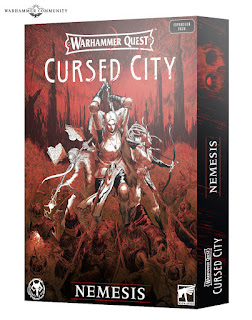 This is an odd expansion and conclusion..... No miniatures in the box? Yes, the last expansion Nightwars, did also not include more miniatures but it still strikes me as odd.
If you play the game though, here is an expansion you will want to pick up.
via Games Workshop on WarCom

Nemesis is the second and final expansion for Warhammer Quest: Cursed City. It takes us back into the doomed city of Ulfenkarn for one last job – to save the survivor’s enclave of Haven from the returned Radukar the Wolf – who is now hell-bent on killing the last remaining mortal denizens of the city he once ruled with an iron fist.

Nemesis comes packed with a detailed Quest Book featuring all the rules and narrative quests you’ll need, as well as immersive background lore which carries the story on from the events of Nightwars. The new rules detailed within represent changing conditions that affect the heroes as they battle through Ulfenkarn’s collapsing districts, and allows them to rise up to meet these new challenges.

You’ll get 25 tokens and counters, including the new Sinkhole Tokens which can cause additional damage to heroes and hostiles alike, plus 19 additional cards for use in your games.

Nemesis also adds Major Actions, which are actions of value 7 or higher, and a hero may also gain an Exalt Token during the Nemesis quest, meaning they start that journey inspired. Some of our old friends from Radukar’s Court, including Torgillius the Chamberlain, Watch Captain Halgrim, and Gorslav the Gravekeeper can make a surprise return during a Nemesis Quest in the form of Reborn Evil, while cards which announce the Lord of Ulfenkarn bring Radukar himself (in Wolf or Beast form) back into the game.

As with Nightwars, this expansion contains no miniatures, but you can acquire each of the required units in turn as you head out on your quest to hunt them down one by one. You’ll need a Wight King and a Necromancer, and a unit each of Grave Guard, Vargheists, and Dire Wolves. However, if you’ve already got a Soulblight Gravelords collection, this expansion unlocks yet more narrative opportunities. You will also need a copy of  Warhammer Quest: Cursed City and the Nightwars expansion in order to play Nemesis.