via the Warhammer Community
https://www.warhammer-community.com/2018/02/19/new-games-new-york/

We have some news for you today out of the New York Toy Fair, where we’ve been previewing some upcoming boxed games. 2 new games no less, each a great introduction to our settings and games. Especially in the USA and Canada, we know that many players’ first experience of Games Workshop will be stumbling across one of our games in their local independent store, and these 2 new boxes have been created with that in mind – to be great self-contained sets, with everything you need to play included.

Blitz Bowl is a new way to play Blood Bowl. The teams are smaller, the games are faster but the action is just as intense, as each player seeks to distinguish themselves in the eyes of Nuffle*  in the infamous Crush recruitment rituals in fast-paced skirmish games. 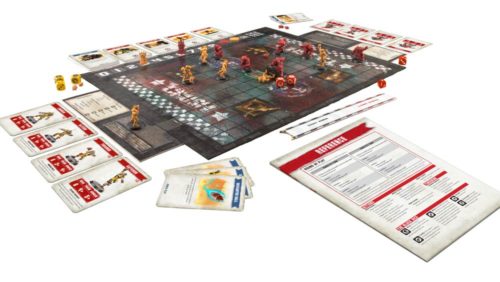 Space Marine Adventures allows 1-4 players to join forces and attempt to break into a Necron labyrinth. Choose your hero and use each character’s unique skills to battle various deadly hazards, not least of which are the Necron guardians themselves. The easy-build nature of the kits and intuitive game make it suitable for players aged 8 and over – good for anything from family games nights to a quick adventure for a regular gaming club. While this set is a great introduction to the 41st Millennium, each Space Marine in the set is also a unique and dynamic sculpt, making them great additions to an existing collection, too.

We don’t have confirmed release dates for you just yet, but keep your eyes peeled for more details on the way later in the year – in the meantime, the best way to stay up-to-date with future announcements is to follow the Warhammer 40,000, and Blood Bowl Facebook pages.