Home » How we play the game. » Playing warhammer 40k in 5th edition 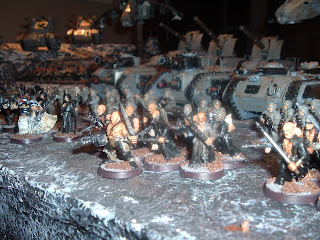 Warhammer in 5th edition has changed drastically since 3rd edition. I somehow completely missed 4th edition so the change was quite drastic for myself. For one, the number of units we now see in a normal game of 40k at 1750 or 1500 pts is much much lower than what we were used to fielding back 10 years ago. Squads now, for example tactical squads, must be 10 marines in order to get their single lascannon. Here is what we have...

I understand this is simplified... w/o transports special weapons etc. but it gets the point across. So in general we would see alot of armies that had 5-6 troop choices in 3rd and the same in 5th now. See what that does to your points? Its not saying that 1500 is now like fielding 2500 points. Its closer to 1500 points is now 2000 pts, becuase there is approximately a 500 point increase in the cost of troop choices.

The rest of everything point wise remains the same. Predators are about the same, Land Raiders as well. Transports have gone down in price dramatically, but that mostly doesnt change the overall effect of what I am discussing...(although its important).

So now we have troops being much more important that before. (they are scoring units). They also get to be protected by cheaper transports, new cover saves, all very cool. The main thing, is now, they are almost entirely protected by 10 men. Meaning you marines out there, you get 8 wounds before your sergeant or your heavy weapon get it.

So here it is....1500pt games are part of the 40k and will also always be. They are not the tactical games or same games that we were playing 10 years ago. They would equate to about a 1000pt or 1250pt game of back then. The problem with games like those, is we rely upon the luck of the dice far too much. Raising the point cost of the game to 1850+ and now we have a good game with some backbone, decent number of units, and the dice gods dont dominate everygame. (3rd ed...... "Hey look I go first, should we just call it a victory for me, or do you want to watch the slaughter?"