How Sniper Rifles Should Work 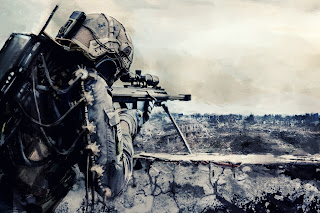 A lot of thought and on-board testing has been done to more fully capture what a sniper rifle is capable of. So at Genesys Games our playtesters sat down (many months ago) to make certain that we had a grasp on just how Sniper Rifles would work for The Genesys Project.

So what is a sniper rifle really for The Genesys Project. ?

Its a powerful rifle with a long barrel and range meant to take out targets at a distance. So lets look at the a Sniper Rifle for the 2nd Age (taking into account that you can always customize your rifle further in the game)

On top of that having a spotter (another model with you) with a Range Finder grants you the ability to modify your die results.

This makes a sniper team very deadly when sat up in firing positions on the board. 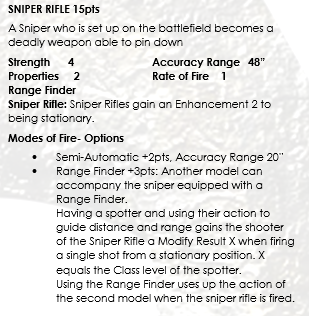 Lets look at an example build for your sniper teams. So you have an Elite Level 2 class for your Sniper Teams. With a Ranged Characteristic of 4 and equipped with a standard sniper rifle.

Infiltrating or just in position to take your shots your sniper team would get the following bonuses when firing.

Assuming the target is out in the open with no cover/not moving and no other battlefield bonuses.

Ranged 4 (Characteristic) +3 (combat situation) and then the die roll to hit.

That's a 7+ die roll. When rolling to hit, you would be able to modify the result of the die by 2! Thats a resolution number of 10-13. At best a 6+ save for many opponents and likely a critical hit!

Don't forget that your spotter should be equipped with something to defend the position should it be necessary.

So if you are not used to the game mechanics for The Genesys Project, this means a sniper team is something that needs to be dealt with. While there is not a rule to pin squads down forcibly, snipers can quickly alter the way your opponent is moving around on the battlefield.

What is the combat situation? Essentially The Genesys Project front loads both players modifiers to combat before dice are rolled, compares them, and the winner gains the difference between the two.

Both players add up their battlefield situational bonuses and compare them to each other (like high ground, movement bonuses, cover, etc). The player with the highest bonuses in any given combat activation gets the difference between them.

For example. My Snipers have a +3 for the rifle being stationary and +1 for being having high ground. The target is in light cover and has a +1 bonus. This would give me an advantage of +3 which would be applied to my die rolls to hit!

When facing a sniper don't let them get additional advantages like elevated terrain without being able to assault the position or laying down a hail of firepower. Have cover and or being moving quickly to reduce or take away any advantage in the combat situation. Whatever you do.... don't stand out in the open. Eliminate them. 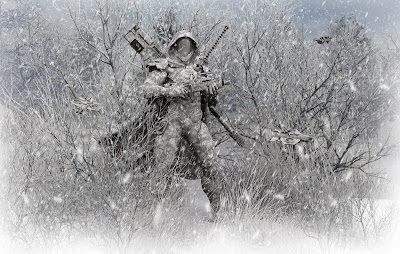 Regarding 3rd Age Snipers..... In the 3rd Age High Powered Sniper Rifles can be upgraded with Range Finding gear among other things.

Need to know more about the Genesys Project?

Check out more at https://www.genesysgames.com/