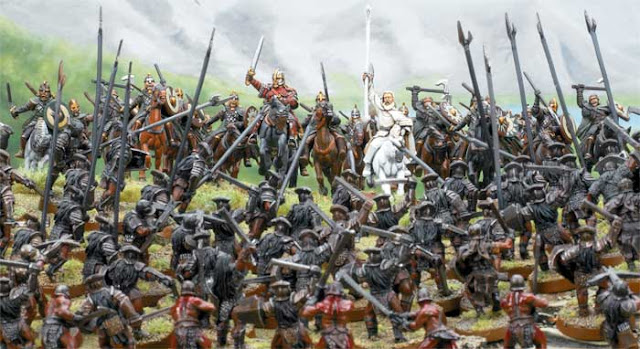 There were a great number of people in my local circles that consider this game to be one of the best rulesets Games Workshop has put out (with may the Necromunda and Mordheim nostalgia). Here is the latest coming directly out of Nottingham.


Lord of the Rings SBG will return at the end of the year as Middle Eart SBG:

Here is a link to the thread on Dakka
http://www.dakkadakka.com/dakkaforum/posts/list/0/685977.page

Manchu via Dakkadakka:
News is trickling out of Nottingham about Adam Troke's "state of the game" presentation at Throne of Skulls. It seems like the game may be rebranded as "Middle-earth Strategy Battle Game." One attendee on Facebook posted:
Feel gutted for the people who didn't get to come to ToS and hear from Adam Troke. Fantastic stuff he had to say, not sure exactly what we are and aren't aloud to post but needless to say the hobby is safe with Adam and we are getting NEW stuff guaranteed!
Another poster has said there was mentioned of reissuing OOP models.

And from another poster:
What adam said though is he wants us to email them and tell him what we want to see come back and also what we want new.

Send in photos of our painted models and literally support our Middle Earth hobby! Without the support we have shown this hobby in recent years he literally couldn't have got the energy from GW put back in!

And again:
Middle Earth SBG. New stuff and Old stuff to be released! There's your headline from me.

Optio via Dakkadakka:
They have a release plan up until 2020.

New stuff will be done the FW way.

We also got to find out why the Battle of five armies release was so small. New Lines barely gave them anything to work with as they changed everything half way through the production process. The result was GW staff did not find out what most of it was until the film came out. Plus side is the initial projects are to fill the gaps.

Manchu via auf Dakkadakka:
More from Facebook:
Sourcebooks are being re-printed in three weeks
New Sourcebook (Most likely BoFA) is being released by the end of the Calendar year
Out of Production models will be released again in Forgeworld Resin
Due to the cost of Forgeworld resin, terrain kits will no longer be sold and instead replaced with battle boards (possibly)
Dain (Not on Pig) was shown and apparently looks better than anything we have ever seen. No pictures were taken to show us.
Adam Troke has is guaranteed to work on Middle Earth SBG for Four Years!! That is Four more years of models released
No mention of a new rulebook but there not be an Age of Sigmar type deal. My guess is that it will be Weapons Rules and Monster rules that will get tweaked. Game is said to largely stay the same.
New Game will be called Middle Earth SBG
The New game will start to go into the Lord of the Rings Appendices and Hobbit Appendices for material after the BoFA is done


More News from more sources!!:
1) A Box Game like the Horus Heresy WILL NOT happen for Lord of the Rings
2) A New starter set will come out for Middle Earth SBG
3) A New Hardback rule book will come out
4) Osgiliath Ruins are coming back. The Laketown Buildings are not