Death from the Skies: Intel Directly from the Book 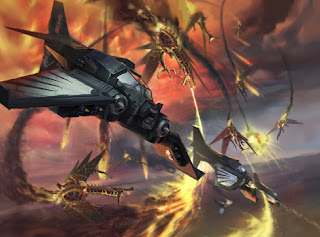 Seems that someone has the book now, and has given us a rundown on just what the new release means for flyers in Warhammer 40,000. Here is the latest information.

- There is a new detachment:
Air Superiority Detachment
Is formed by 1-3 Flyer Wings*
Restrictions: All models have to be chosen from the same faction

Benefits:
- Air commander; If the commander of the Wing is in reserves, re-roll interception, If you have superiority and your Chief is in Reservers you add +2 to your reserve rolls instead of 1.
- Combined formation: You choose to make a single reserve roll for the whole formation if you want.
- Transport that have the hover mode have the Objetive secured rule.

Of course I need to read the book to know what it all means.
All the existing flyers have the same point costs and rules as in their current codex.

The stormhawk costs 125 points and comes with: Twin linked assault cannon, twin linked heavy bolter, "super laser thing" (24", S9, AP2, Heavy 2), Ceraminte plating, and one ítem that allow the stormhawk reroll when jinking. Has the supersonic special rule.
May exchange the laser thing for an Icurus Cannon for 155 points. May exchange the heavy bolter for a Typhoon missile launcher for +20 points or for a Celestial hammer missile thrower for +5 points.

and can other chapters....BA and SW etc use them?
Looks like, but they have to be taken as part of the detachment mentioned before.
The book says that all the flyers described in this book replace their Data Sheets in all the current codex. Seems that this rules are coming to stay.

FMC are not in this book.


I will try to sumarize the new stuff:
All Flyers have now three new Atributes: Combat Role, Pursuit and Agility (the more the better)

When shooting there are two types of targes: Ground and flying. Flying targets are FMC, other Flyers, Jetbikes and Grav vehicles. The rest are ground targets.

New rule: Air superiority: If a player has Flyers in Reserve at the end of the Aerial Duel Phase can add +1/-1 to their reserve rolls. Opponent has -1 to reserve rolls.

Any flyer can now make an additional pivot at any point of ther movement if they roll their Agility or less in a single D6.

Only Flyers with the Attack Role can have AA when shooting, but they have -1 BS when shooting Ground Targets.

Flyers do not benefit from cover (Terrain or other models)

The different combat roles give different bonusses depending on the type of the Attack Pattern.

There are 6 different attack patterns. If I could post a picture of the patterns I would do it, but I think that it is forbidden ...


To sumarize a litte bit:
Duel Phase happens at the beginning of each Player's turn. It is optional. It only involves Flyers in reserve or active reserves. If a player wants to skip the phase, roll a d6. Winner decides.

INTERCEPTION
Each player roll a D6. Winner (after applying modificators) is attacking player, the other defending player.

APROX, MANEUVER AND ATTACK
During each phase each player chooses secretly a Tactic, then compare tactics in a table and apply results.

At the end of the Attack phase, resolve a shooting phase between both flyers, applying the mods from the previous phases (if any)