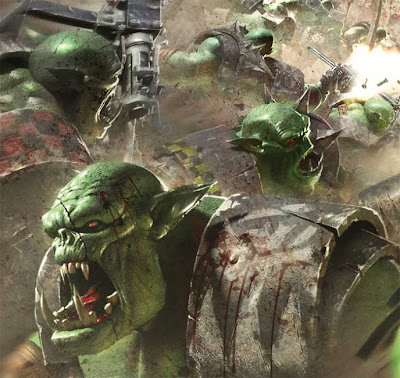 In this mornings rumors we have Ork Weird Boys with powers that get more dangerous the more Orks that surround them, with powers directly from Mork (offensive), and ones from Gork (strategic). There are large new squigoth type creatures, new rules for Mega Armour units, and Orks with FnP.

It looks like we get to start off a November with a nice little rumor set.

Please remember that these are early rumors.

via Batty (from the Faeit 212 inbox)
First we can start with orks what i have heard is that they stay the same with furious charge and mob rules but all orks ( not grots or squigs)
will get FnP 6+ as a race because they are basically tough and it takes a lot to kill and stop an ork.

Most weapons will stay the same except choppas are ap6 but gain ap5 on charge and big choppers will be +2s and ap4 and ap3 on charge.

Nobz stay the same but are getting more characterful upgrades available to them, new kinds or grot assistants such as suicide grots(act alot like bomb squigs but prone to blowing up in unit) and
ammo runts and attack squigs also more weapon options like Big shootas and such.

new nob mega armour unit with teleporting abilities but its teleporting works differently from conventional deepstrike bit more random.
There is a special mek character that can bestow teleportation on D3 units.

special bloodaxe character with rules that can bring back boyz units once they are destroyed, much like an imperial guard special character.

A large multi wound squigoth type creature, not FW, it is ever hungry and uses a hunger points system. if it doesn't fulfill the hunger points in enemy's it will rampage nearest unit friend or
foe in order to eat.

Two new ork psychic lists for weirdboys, Mork more offencive and Gork more strategic. Many powers in the lists get more powerful the more orks are around the weirboy,
although the more powerful they are the more dangerous they are if they are miscast as they will often misdirect or hit the weirdboy and unit.

New ork only fortifications (including an ork rock) and an ork only warlord chart.