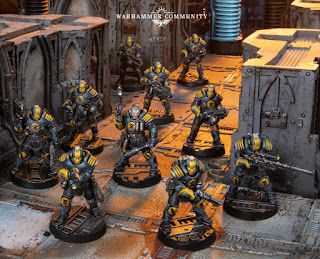 This is an odd way of showing off sprue bits, (pls just show the sprue). So here are some of the interesting bits for the new Palantine Enforcers coming to Necromunda.

As we all know, the second coolest pose for a police officer is flying through the air while firing two guns. The coolest is the calm, collected officer on one knee just about to take out the criminal with a single shot.

It’s dark in the underhive, and that’s not just the heart of darkness at the centre of the criminal underworld – it’s literally dark! Fortunately, the Enforcers have torches, meaning that no dark corner is safe from Lord Helmawr’s justice.

Boltguns used to be the preserve of Space Marines and Adepta Sororitas, but Enforcers are able to requisition the finest weapons to keep the peace. Unlike some of the knock-offs that are seen in the underhive, these will keep firing until the battle is won.

Enforcers have access to a wide range of grenades, from the exotic choke gas and photon flash to these smoke grenades – you can’t hit what you can’t see.

Speaking of which, is that a criminal stood out in the open? Bang! Not anymore. Enforcers 1, Crime 0.

While other gangers in the underhive all hold their pistols in one hand, the Palanite Enforcers have been properly trained and so can hold their stub guns with both hands. They consider holding a gun sideways to be criminal activity, regardless of how cool it may look.

For an Enforcer, a mere club isn’t enough – they need something with a small electric generator attached. This makes it both an incredibly effective weapon and means that Enforcers can quip “shocking” when they take a ganger out of action.*

Enforcers aren’t just well-armed, they’re well-armoured too! Their flak armour is further improved by an armoured undersuit – stylish AND protective!

Despite what the Space Wolves might tell you, it’s always a good idea to protect your head! Not only do they look amazing, but they’re also crucial for making sure that nobody from their pre-Enforcers life recognises a trooper.

They’re the police, they’ve got to have handcuffs!