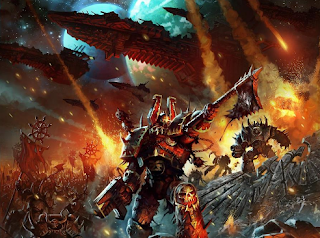 This is coming from yet another source, talking about how things are about to step even further towards midnight. Primarchs and Demon Primarchs coming to 40k, a huge Black Crusade Campaign.


via anonymous sources on Faeit 212
Primarchs and Demon Primarchs are coming to 40K.

They won't be the same as they are in 30K. They're going to be slightly different to account for the 10k year gap.

We will be seeing The Lion, Russ, Guilliman, Khan, Mortarion, Angron, Perturabo and Magnus.

It will be once all of the 'end times' build up has finished (all of the latest campaigns) and we enter the new age (8th edition).

GW wants to cash in on FW success with the HH series as well as the fact that we're returning to a 'Golden Era' style GW with the new CEO and Merchandising and Marketing Director - Meaning they are actively listening to us, the customers and are proactively doing what we want now.
(Just look at the new Monthly WD with battle reports and painting guides, the new Get Started sets, the new clip n play introductory kids sets, the FAQ/Errata they're doing, the Points Systems for AoS, the social media interaction with the Facebook groups and new Warhammer TV talk show etc!!)

GW has been paying attention to the success of the HH/30K and to us wanting storyline advancement and more excitement (whilst not wanting a full AoS style reboot) and 8th edition is going to be that. (The latest campaigns, Baal, Curse of the Wulfen, Death Masque etc are all part of that lead up).

Apparently there is going to be a huge global campaign based around the next Black Crusade and a huge push by Chaos - As well as Nids doing their thing, the Orks going on a Rampage, The Tau pushing out, The Eldar getting themselves involved, The Necrons rising up and The Imperium battling on all fronts. (Business as usual but things are much more desperate!).

There will be storyline advancement on a scale we've not seen before!!

Apparently, the next Campaign will feature the Ordo Hereticus and Chaos and after that, we will be seeing the final stages of the lead up - with lots of new a chaos goodies including those Greater Demons, Rubric Marines, Plague Marines and everything else chaos related that's coming!