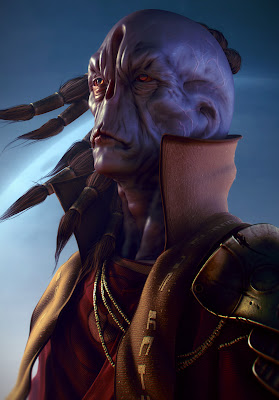 More Tau rumors are hitting now, and we are looking at things like a new heavy support unit that is a big mech of sorts, two flyers, updated Firewarriors, and more. The best part of all is that is we are looking at a new Tau codex coming early next year.

via Faeit 212 (A Must Remain Anonymous Source)
-Tau are coming early next year.
-Unit profiles are being finalized.
-The Tau are looking more and more like it will utilize and potentially modify the allies feature.
-unique fortifications.

-Just info on rules, no idea on models:
-HQ option to make crisis suits troops (not a special character, just an upgrade)
-crisis suits remain roughly the same but have a couple new weapon options.
-New 1-per-squad weapons
-new heavy support suit that has stats like a carnifex and no jet pack, just a big mech
-new elite suit that has a lot of sub 18" gun options, with a high rate of fire, or low AP.  High toughness and -good armour save at a minor loss of mobility (think jump pack instead of jet pack)
-two flyers, one for AtA one for AtG (same basic fuselage)
-fire warriors are a little bit better and have more of a stormtrooper / commando feel, than a rank and file guardsman feel.

-oh and one of the other things right now, I was able to confirm that the current playtest is that firewarriors who do not move in the movement phase may immediately run after firing their pulse carbines in the shooting phase.
10/04/2012
Natfka
40k, 6th Edition, Rumors, Tau, Warhammer 40k