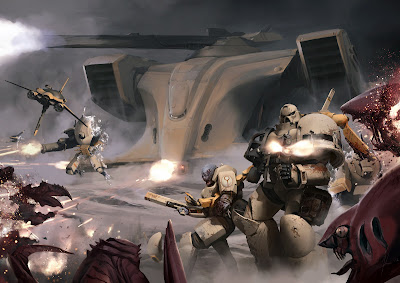 We recently heard that Hastings was giving us an update schedule which included Chaos Daemons right after the new year, so following that line of thought, here is the latest on what I have heard regarding the future releases. It seems that both Warriors of Chaos and Daemons are probable to see a White Dwarf update.

From what I understand, they're going to be WD updates and then digital releases that consolidate it all into one e-file.
There's a potential that maulerfiends and forgefiends are going to see a fantasy adaptation version.

Tau and Eldar are coming early next year.
Unit profiles are being finalized.
The Tau model is looking more and more like it will utilize and potentially modify the allies feature.
Both races have unique fortifications.