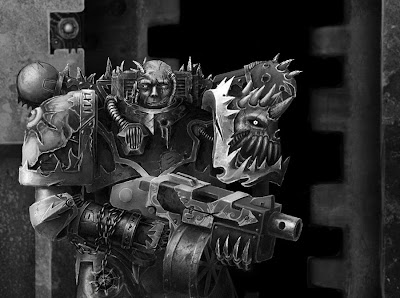 Apparently Games Workshop is working hard to silence the rumor mongers out there. They have supposedly put up a new rumor control policy and it involves the guy pictured above. Just joking on the pic, but GW is attempting to control the rumor mill. Check out the following rumor below.

As always take with salt.

Via By 4Chan via Kettu over at Heresy Online
Basically, GW have decided that starting soon, nobody and that means absolutely nobody, other than the guys who deal with the products etc, will know what is in the pipework or being released until 1 WEEK before it's actual release date. There will no longer be any incoming emails or the like, apparently the first that anyone will know of anything will be on the back page of WD. Which looks like releases will be tied into the same day that WD is released bearing in mind that subscribers get it around a week early.

Now before you all post pictures of salt cellars etc, I shall tell you where I heard this info. Today GW held it's National Managers Meeting at GW HQ in Nottingham, and the source of this was actually present at the meeting. So bearing in mind it came from the head honchos at GW, and was announced to each and every member of GW management from across the country, please refrain from the salt jokes please.
5/17/2011
Natfka
Rumors