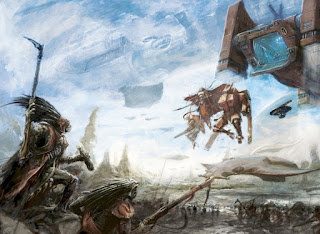 A Kroot Codex? I tend to find that one hard to believe, but possibly....


These a rumors, and one that a lot of salt should be used.

via Soldier of Dorn on B&C
http://www.bolterandchainsword.com/topic/345193-chaos-space-wolves-codex-kroot-rumors-heavy-salt/

A source of mine has just let some new rumors slide. Heavy salt, but he predicted the Nurgle demons release a month before it was announced, along with knowing about the Death Guard/Primaris starter early and knowing about the new Knight back in November, so... I'm trusting him on this one. Your millage may vary, of course.