Adeptus Custodes QnA from the Codex 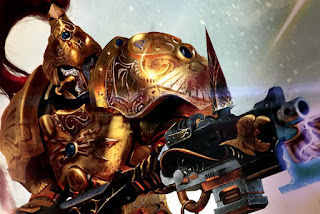 Here is a QnA from someone with the Codex in hand. Some good information in here for the Adeptus Custodes

61 for spear, 63 for axe. No storm sheild option for them though


How is a custodian made?
Super Secret Sauce. (it mentions it but doesnt really go into too much detail)

Coolest bit of lore so far?
They walked from the big ass gates on terra and took on khorne daemons and thrashed the shit out of them


What's the stat line on the bikes?
T6 4W, and 14" movement.
270 including standard wargear (base unit of 3) units are 3-10 in size
270 is for a unit of 3 bikes. Chapter tactics is basically everyone gets a 5+ invul, and on a D6 for each mortal wound a roll of a 6 ignores it. If the army is battle forged and completely adeptus custodes, infantry and biker units get +1 to their invuls and super obsec


Also forgot to mention they do have HQ on bikes, and I think they make great hunter killers
Do HQ bikes have weapon options other than lance?
Just the misericordia (but thats additional)

how many points does each Vexillus banner cost for the Praetor?
between 20 and 50 points for the vexilla
The Vexilla Defensor is the 5++, 20pts

Custodian chapter tactics? How many points are the bikes and what is their min/max unit size?
270 including standard wargear (base unit of 3) units are 3-10 in size.

Is the contemptor dread the only dread they can take ?
Yup

Would you mind posting the Shield-Captain in regular armor's wargear options?
Spear, axe or sword and storm shield. Misericordia additional

I know that you may no longer have the codex but what kind of power ratings are the standard custodes and the jetbikes?
I own the codex. I picked it up from a store that had it on its store shelves.
Vertus praetors are 15 and 5 per additional bike

Regular custodes are 8 and 3 per additional dude

Point cost for Trajann with all his gear?

What forge world units are in there if any?

Confirmed none, however a little birdy has suggested to me that we may see 40k rules for some of the 30k custodes units..

Do the dreadnoughts have access to any chapter specific weapons?

Do the dreadnoughts have access to any chapter specific weapons?

Can you snap a pic of the weapons profile page? Curious about the difference between the weapons shooting/melee

Could you please post the details for Shield On Dawneagle Jetbike??

14" move, 6 Toughness 7 wounds, 5 attacks. everything else is the same as other custodes.

What does the shield do now?

What's the cost of a 5 man board and sword? What about captain+vexilla+3 dudes, all shield and sword