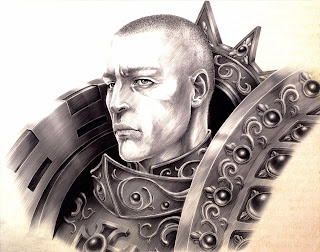 I had not seen this yet, but apparently Constantin Valdor will be released from Forgeworld. You can see the details below.

30k - Valdor to be revealed at HH Weekender

The pic comes from
https://warhammerworld.games-workshop.com/2018/01/26/horus-heresy-necromunda-weekender-2018-studio-guests/


Constantin Valdor - Constantin Valdor was the Chief Custodian and Captain-General of the Legio Custodes during the Great Crusade and the Horus Heresy. Just prior to the outbreak of the Horus Heresy, Valdor was charged by the Emperor to accompany the Primarch Leman Russ of the Space Wolves in bringing the Primarch Magnus the Red of the Thousand Sons to account for breaking promises he had made during the Council of Nikaea which had strictly forbidden the use of sorcery and psychic powers within the Imperium. Valdor, with a contingent of the elite Custodian Guard, fought alongside Russ and the Space Wolves during the Fall of Prospero. He and his forces were responsible for killing at least three of the greatest psykers of the Thousand Sons Legion and routing a force much more numerous than their own. He was also responsible for saving Bjorn the Fell-Handed when his arm was corrupted by the sorcerous powers of a Thousand Sons psyker. Valdor sliced Bjorn's arm off to prevent the corruption from overrunning his body. After Horus' betrayal became known to the Imperium, Valdor was present during the meetings of the Officio Assassinorum's Clade Sires and Siresses. It was Valdor who suggested that an Assassin from each Clade operate as a team to assassinate Horus, rather than act alone as was the standard mode of operation. It is currently known that after the Horus Heresy Valdor would become a High Lord of Terra, but would eventually step down voluntarily to protect his beloved Emperor.
1/29/2018
Natfka
30k , Adeptus Custodes , Horus Heresy , Legio Custodes