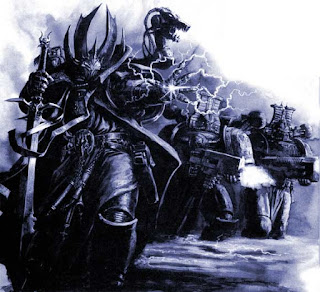 Here are some additional threads for the Thousand Sons that were discovered through the battlereport seen thursday. The information here was gathered from the same game as the earlier post, but some of this is more detailed.


via Vanger
So what I managed to gather according to todays Adeptus Custodes vs Thousand Sons game:
- army wide rule: +6" to all psychic powers
- warlord trait Lord of Forbidden Lore gives +1 psychic power
- Glamour of Tzeentch makes units harder to attack, so attackers have -1 to hit
- Doombolt causes mortal wounds and halves the movement stat of affected unit
- Tzaangor Enlightened cause an automatic wound on 6+ to hit (not sure, commenter was not on the top of her game)
- Shaman can re-roll his first cast
- Mutalist is a beast, 14 wounds, 4 attacks, gives random benefit to units around it, like re-roll to hits, explodes when killed
- Dark Matter Crystal enables you to remove a unit and deep strike it in
- TS get a strategem that let's you set up a unit in the webway and can come in from deepstrike

via Sonoftherubric21
Gents to add something here this is the notes set I took for what part of the battle report that I saw;

Previous info
Magnus will have more then 3 spells. confirmed on Warhammer community through facebook.

Skyfires are *100%* confirmed, I have a picture of the Warhammer community post sitting on my phone confirmed Skyfires are in the book. (I keep seeing people debating that as a question so I figured it was a good idea to clarify with the little info I do have.

So thats 4 new units in total.
Tzaangor Shaman (This will either be an HQ, or more likely an Elite slot)
Tzaangor Skyfires ( I would presume fast slot)
Tzaangor Enlightened ( I would guess fast, but also possibly elite?)
and Mutalith Vortex beast.  (Heavy fairly obvious)

Looks like we are getting a first or second week of February for Thousand Sons. I heard that Custodes are either getting the pre-order OR the release (dont know which) in late January, So we can expect early to middle February release.

Seems like by mid february the book will be out, we should expect info over the next 2 weeks or so to start trickling shortly. Id expect next few days we will get something maybe after they focus on Custodes.