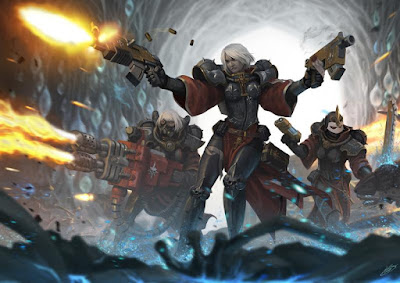 The Adeptus Sororitas, or Sister's of Battle has been a long wait to get any real intel on a new release, This may be a legit source for real information on them, and literally has them on hold right now. Perhaps waiting for the rumored new edition of 40k hitting next year?

Also Leman Russ in plastic coming? Unclear as to whether this is a follow up to the Daemonic Magnus rumors, which would be awesome to conclude the Warzone Fenris Campaign with two opposing plastic primarchs.


Please remember that these are rumors. I don't know how solid these are.

via anonymous sources on Faeit 212
Jes Goodwin has wrapped up the artwork and the rules for the codex. Sisters are ready and could be released within 3 months at any time

The bad thing is that they have been in this state for more than a year and Jes has stopped the process.

Also the next plastic primarch would be Leman Russ, but you probably know that already.