An Introduction to the Age of Sigmar! 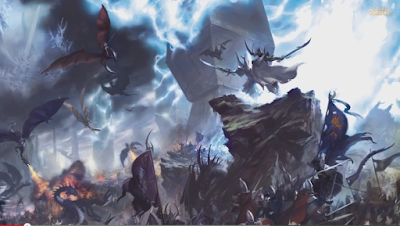 We have seen a lot of information come through, and I have held a lot as well that came in to me directly, simply because I think there was a lot of guessing and reverb going on. Today I believe we may have a decent look at just what this game will be about, and a run down on some basics of game play and the feel of the game.


via anonymous sources on Faeit 212
I think players should be doing a bit more to give current players more info,
but as they don't seem to want to do that, I thought I'd weigh in with what
I know.

I had to be taught how the new game works in order to
teach it to potential players.

As this info comes from the intro game there may be some simplification of
the rules that I am unaware of, as you don't want to overload a newbie with
too much info.

Anyway, on with what I know:

Age of Sigmar offers a skirmish-level fantasy game, he did not know
whether it would be expanded to a mass-battle game later but he thought it
would.

Players take control over several small units, organised into loose groups.
The models are on round bases. He mentioned that at least at our location,
people can use square bases if they want to, in fact with the new
unit formation rules it might be slightly easier to use squares.

Units can choose how loose their units form up, either very loose (think
8th ed skirmisher loose) with benefits to movement and defense against
shooting, tight, or square.

Tight allows for more maneuvers than square, but is less maneuverable than
loose. However, if you receive a charge in tight formation you're better
off in CC than if you received it in Skirmish.

Square offers almost no maneuverability, you can only move slowly forward.
However, if you receive a charge in Square formation then you're better off
in CC than if you received it in Tight or Skirmish formation.

One of the units in the intro game (the Chosen of Sigmar) can elect to
change their formation when someone declares a charge against them as long
as they pass a Ld check (base Ld 8 so it's fairly easy, hero had Ld 9)

The only real benefit to receiving a charge in Skirmish formation (and
there are a ton of negatives - you don't get a bonus from your numbers,
only the models in base contact with the enemy can strike (see below), and
you can't parry) is that the enemy don't get the bonus for charging you in
your flank/rear, since the skirmish formation means you effectively don't
have any.

A lot of the base rules are the same as in 8th ed fantasy. The same
statline is there (M, WS, BS etc etc), armour works the same, shooting
takes similar penalties (long range, soft cover, shooting at skirmishers
etc), the difference is in the recommended level of play. CC works out in
much the same way, highest I goes first, units in base contact with either
an enemy model or a friendly model in base contact with an enemy model get
to strike, though only the former get to use all their attacks. Casualties
are removed from the back, as per usual. Different kinds of weapons
(halberds, spears, etc) and their associated bonuses weren't brought up
since the models involved only used hand weapons. Hand weapon + shield
still gives you a parry save though, as long as you received a charge (or
charged yourself) in tight or square formation, and the attacks weren't
coming from your flanks or rear.

GW is trying to push this to be played at the 1000-1500pt level. A lot of
focus was put on the heroes leading each force, and leaders will have more
impact on the game. Think LotR Strategy Battle Game and its Warband rules.
He implied that leaders in general will be more expensive, but have
more of an impact on the game. So a 1000pt force might be led by a 300pt
hero who is absolutely the core of the force, and if they die the rest of
the force is at a severe disadvantage. This goes double if the leader is
killed in a challenge by the enemy leader.

On a personal note, the game seemed...fun. The choice between different
types of formation provided a level of tactical flexibility that didn't
exist in the old game, but required more forward thinking. Do you start in
skirmish formation for more maneuverability, risking getting charged with
no bonuses from your numbers? Or do you form up Tight and split the
difference? Or do you make like a Dwarf and form up Square and just risk
getting outflanked? Also, when the two leaders got into a challenge in the
middle it was exciting - mine was faster but not as strong, hers was slower
but more likely to do lasting damage. We stopped before one leader killed
the other though.

Magic wasn't raised in the intro game, but once again I was told
it hasn't hugely changed. Only thing I should mention is that,
aside from some notable exceptions, wizards can't be leaders of a force.

On a background note - I was laughed at for about 10 straight minutes
when I told her about the rumours of "Waaaghkin" led by an all-female caste
of "Nigmos", though he was strangely silent when I mentioned Regalia.

From what little he did mention, the core races are all-but unchanged in their
basic background. Humanity is represented by the Empire, with the Chosen of
Sigmar being an auxiliary detachment that is often fielded alongside Empire
forces. Orcs and Goblins are there, nothing about 'Nigmos' or whatever.
Chaos is obviously there, in both Daemon and Warrior form, he didn't know
anything about Beastmen. Lizardmen weren't mentioned, neither were Skaven,
Elves were though. Elves are becoming a bit more like Space Marines in one
specific aspect - they're all one race, but differentiated on the grounds
of how they wage war, a bit like Chapter Tactics. High Elves will have 'Elf
Tactics' that reflect their training and drilling, Dark Elves will
have 'Elf Tactics' that reflect their cruelty and malice, and Wood Elves
will have 'Elf Tactics' that reflect their reliance on hit-and-run attacks.
I anticipate this means a single Elf book with basic troop units, some
specific units for each type of Elf, and the rest of the differences will
be in these 'Elf Tactics' and colour scheme etc.

I'm trying to remember anything else, the units were about 10-15 models
each. The Chaos forces were comprised of a unit of 10 warriors, 15
marauders, 5 warhounds, and the chaos leader. The Chosen of Sigmar (being
represented by Lizardmen models as the actual models are obviously
currently unavailable) had 15 'warriors of light', 10 'hunters' with
shortbows, and 10 'chosen', plus the leader.

It seemed a little unbalanced
in the Chosen's favour, but my manager said that when you're introducing
people to the game, although you let them pick, you talk up the Chosen more
so that they're more likely to pick them and be the good guy. That way,
although it looks fairly even, the Chosen have an advantage. Like other
intro games that have come before it, it is intended to provide 2 good,
though small, starting forces.

It was implied that both armies would
need 2-3 boxes of troops added to them to get them to 'average game' size.
This was obviously important because a key part of the intro game is not
only selling the intro box, but also upselling the customer to get a couple
more boxes for a bigger force.

Stat-line wise, though I wasn't told any specifics (this was more a matter
of 'Okay so the Warriors of Light are in close combat with the Marauders,
so you go first and hit on...') regarding statlines, this is a rough
breakdown:
- Warriors of Light are a halfway point between marauders and Chaos
Warriors, not as tough or as well armoured, but more skilled than
marauders, they were hitting marauders on 3s and saving wounds on a 4+
- Chosen are basically Chaos Warriors, same armour save, they were hit on a
4+ and wounded on a 4+ by Chaos Warriors, saving on a 4+
- Hunters are skirmishing bowmen, their only unique aspect is that I think
their bows are armour piercing. They were hitting stuff at long range
(range 24") on 5s, wounding Chaos Warriors on 5s, but Chaos Warriors with
shields were only saving on a 4+, instead of the 3+ they were saving on
against the Hunters in close combat.
- Leader of the Chosen was basically the Chosen's statline with +1 to
everything except Movement and Toughness. He had a sword that allowed him
to re-roll failed hits against Chaos things.

I am using the current statlines for Chaos Warriors, Marauders etc in these
estimations, and they are liable to change.

Anyway, that's all I can remember. I hope this is informative!
6/19/2015
Natfka
Age of Sigmar, Gaming News, News Headlines, Rumors, Warhammer Fantasy

What's On Your Table Needs You: Submit Now

Its a great time to submit your work to your work to What's On Your Table. Submit up to 8 images or a short video to natfka@live.com