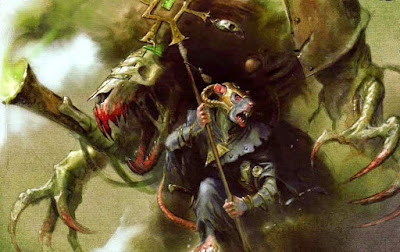 There are a lot of people up in arms about Warhammer Fantasy ending the way it is. There is a lot of speculation about the low sales, that the game just does not sell enough to keep it going, and that this has been the trend for years now.


Please take what is being said here as rumor. Its a topic of conversation on whether or not Fantasy could support itself.

These are excerpts of what is being said over on Warseer over the last day about Warhammer Fantasy and the Age of Sigmar. If you want more of the details, please head on over to Warseer and check out more of what is being talked about. Bad sales for Warhammer Fantasy is a subject i recall being discussed in local stores all the way back to 2000. 40k was just much more dominant.
http://www.warseer.com/forums/showthread.php?409992-Age-of-Sigmar-II&p=7469196&viewfull=1#post7469196

75hastings69 on Warseer
AFAIK, the box AoS is the first in several weeks worth of releases for fantasy, and the actual BRB comes soon after the AoS box

Nobody listens to angry vets who form a customer base that isn't perfoming well enough in terms of buying to sustain the current model.

If people see something and it's cool they'll buy it. It's a gamble on GWs behalf to revive a dying fantasy customer base, they could do it better with advertising and reduce the risk of this failing, but hey this is GW...

Fantasy used to do well, back when GW didn't have much in the way of competition, now they do, they have competition that do it better and in most cases cheaper, sure the competition might not be to everyones taste BUT ITS AN ALTERNATIVE, this has been the sole biggest reason for GWs falling sales (well that and their pricing policies are based back in a time when they could pretty much do what they want - but they're all too stupid to see that times and indeed the landscape of tabletop gaming have changed & evolved. I myself have spent my money on other companies since finescat, and I will openly admit I used to be a huge GW fanboy, my eyes have since been opened to the wonderous variety currently available, and truth is I no longer need or even want GW
6/19/2015
Natfka
Gaming News, News Headlines, Warhammer Fantasy