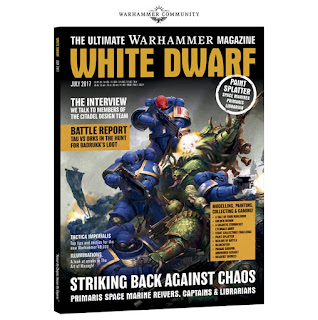 There is a preview now up for the July White Dwarf that takes a look at the new Primaris Marines and new box sets. Here is the latest preview from Games Workshop.

Firstly, there’s a great look at the new releases for Warhammer 40,000, namely the new Primaris Space Marine heroes and Getting Started sets. You may remember these from our reveal – this is your chance to get up-close and personal with the new sets. You’ll also get to see Open War cards for the first time – we’ll have more information about these soon!

There’s also an in-depth interview with the Citadel Design team – the guys that make all the miniatures you know and love. If you’ve ever wondered what it takes to make the best fantasy miniatures in the world or want some valuable insights into our design process, it’s well worth a read. 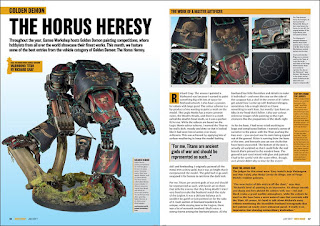 If you’re getting stuck in with the new Warhammer 40,000, this month’s White Dwarf is your comprehensive guide to the new edition, starting with our first Tactica Imperialis – a monthly guide to strategy in the new Warhammer 40,000. We’re starting where your army will – at the list building stage – with a rundown of how datasheets and army special rules work. This is a great way to get an edge on your opponents in your first few games.

There’s also an intense battle report between the T’au Empire and a pack of loot-hungry Orks led by Kaptin Badrukk – showing off all the new rules in action as two of Warhammer 40,000’s most diametrically opposed factions duke it out among the ruins of an Imperial city. 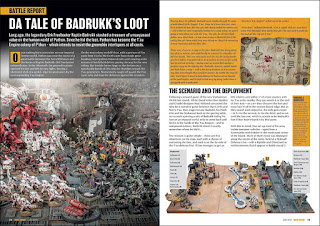 Painters of all levels can look forward to a huge number of painting guides covering the new releases. Even if you’re not a collector of Death Guard or Ultramarines, there are a wealth of tips to use on your models, from painting rotting flesh en-masse to realistic scrolls and seals for characters. Our favourite is an in-depth guide to painting the face on the Primaris Librarian, right down to bags under his eyes – perfect if you’ve been looking for a unique way to make a character stand out.

Fans of Warhammer Age of Sigmar (or just anything greenskin) will enjoy this month’s Illuminations, which has a closer look at The Art of Waaagh, featuring classic illustrations as well as some awesome new ones, including a huge mob of Ironjawz smashing through a shieldwall of Stormcast Eternals. There’s also a close look at James Karch’s enormous collection of Astral Templars Stormcast Eternals, complete with his guide on painting these boisterous hunters of beasts. 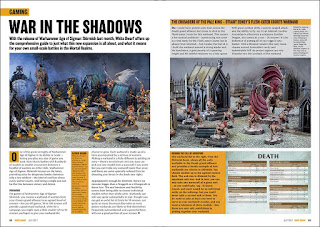