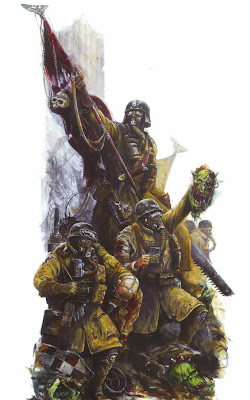 There are some discussions on rumors regarding the Steel Legions and the timing of both the Imperial Guard codex and Orks that are lined up to follow. Alongside the two an Armageddon update, as well as a Black Tempar codex supplement might very well be making an appearance.

via an anonymous source from the Faeit 212 inbox.
As we know Imperial Guards and Orks will be released in the first part of 2014. as well as an update of Armageddon campaign, Black Templars Supplement will come in the same time.
Because Templars have a lot of fluff around Armageddon.

GW is going to make (or remake) a Campaign for Armageddon with updated fluffs and missions scenarios.
As they are changing the helmet model of the Steel Legions, they will have to make new artwork for that.

And it's logical that it should be released between Imperial Guards and Orks. (as there is no other 40k codex between them)
1/01/2014
Natfka
40k, 6th Edition, Imperial Guard, Rumors, Warhammer 40k