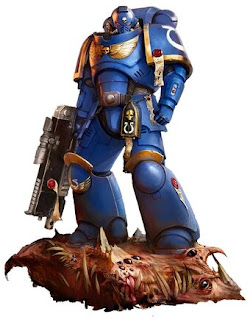 The rumor mill towards the end of 2019 had a solid answer.... the next edition. There are even some serious wish mongering that the rules would polished up, the psychic phase reworked, new Endless Spells for 40k, and even a rise of two new Chaos Primarchs.


This is meant to be more of a discussion and has been the topic of several conversations here within my personal gaming groups (we still talk and bs late into the evenings during these quarantines).

While a new edition could be coming, is Covid 19 going to slow down it's release or even push back? I would assume the word would be no, since a new edition has a lot riding on it, and GW does plan out quite far ahead on their release schedule. Extended downtime though, and something this big could be delayed deep into 2021.

All I know is that so many things are now hanging in the air, that even a loose release schedule is a little crazy to talk about, and yet, late night conversations still keep going back towards this topic. Not to mention it's one I look consistently for talk of.

Some rumors we were hearing towards the end of last year 2019.
All of these are a little vague or dubious

Look for 40K 9th Edition in 2020. It will be a polish-cleanup edition for 8th.
Some rules mechanics from Age of Sigmar are being integrated into the game.
Refining of rules for some troublesome Keywords Psychic Phase to be reworked.
Only a tiny number of codexes remain before the new edition arrives.
Psychic Awakening series is a rules & background leadup to the new Edition.


Some noticeable signs mentioned in forums
#1 - Psychic Awakening should end at that point, which leaves a big 'ol "what's next?" hanging over everything. A new edition would make sense.

#2 - The Psychic Awakening books have been similar to previous series of campaign books that culminated in a new edition, having been the case with both Warhammer Fantasy transitioning into Age of Sigmar, and 7th transition transitioning into 8th edition.

#3 - There's supposedly a big release in the summer that the employees aren't allowed to take time off for. Usually these are just done for massive releases like new editions.