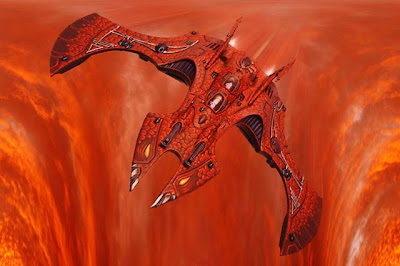 The rumor mill is flowing again with mention that an Eldar Flyer has been spotted. While we do not get it mentioned by name, I fully expect this will be a new flyer and not something we have seen already through Forgeworld. This is simply by precedence with the stormtalon and the direction Dark Eldar flyers are. So I would expect it to be a new flyer, or one that does not yet have a model.

Now in the upcoming wave expected to be released June 2nd, we get Ork, Space Marine, and Necrons flyers. That leaves a lot of codices available for a second wave. Tyranids, Chaos Marines, Dark Eldar, and Eldar would probably fill out the 2nd wave. (Tau would more than likely be first of 2013 alongside their new shiney codex).

via Darnok
Multiple birdies have mentioned sightings of an Eldar flyer though. "In the warehouse", make of that what you will.

via Eldargal
There is supposed to be a second flyer wave later in the year, it isn't beyond the realms of possibility that we will see an Eldar flyer then with WD rules like the incoming batch are presumed to have.
5/22/2012
Natfka
40k, Eldar, Rumors, Warhammer 40k