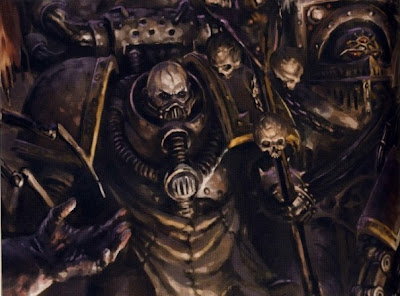 Today I figured I would post up on a small compilation of rumors for the upcoming Chaos Legions codex. Please take the following as rumors, and add the required amount of salt.

via Harry
I do think CSM are the first sixth edition book but not sure if they come just before or just after 6th edition.

via theDarkGeneral
theDarkGeneral contradicts this, saying he has heard of 3 separate Legions books with an even split of Legions in each. He claims 2 are planned for release in 2012 and the third for early 2013. He further claims a “Lost and the Damned” style book and a “largely Daemon-based” campaign book are in the works for after that.

Jared Van Kell say Mat Ward is rumoured to be writing the codex.
Reds8n contradicts this, saying Ward is tied up with other projects (likely LotR or Hobbit related) and that Phil Kelly will be writing this book. theDarkGeneral has recently agreed with this.
Minor Gods will supposedly make an appearance and all Legions will be included
The minor Gods are named, and will act in a similar way to marks, but have no Daemons.

the background will include info on “alliances, distrust and full fledged war within the 9 Traitor Legions” with Black Legion referred to as "arrogant"

Each Legion will have something unique to them, but will have unit restrictions to offset their inherent bonuses

it won't change according to your Legion (HQs) as in swapping more Heavies for less Fast, but your access to units in those categories opens up, becomes limited, or closes off accordingly. Easy example I was given, is taking Khorne Daemon Prince means no Scouts...

*Nightlords: I don't ask much about them, though a lil' i have for my buddy Paul has around 25,000+ points of them...Hit & Run and Stealth for universal special rules, but possible counter attack (for elite unit) as well as jump pack troops.

*Word Bearers: Apparently getting a lil' extra attention, and besides Dark Apostles, new models for "daemonancers", which just might be unit champs/sgt upgrades. I'm not sure. BUT, their summoning of Daemons from the Warp apparently allows re-rolls on the scatter dice, as well as new mishap chart!

Word Bearers: Will be able to take Marked units but with some restrictions. Apparently with all the current Black Library Books out on them (I'm enjoying their reads!), and mention of the Sanctified in Siege of Vraks, the ability to take Marked units has been brought up. Not sure how they'll do this, if it'll be a 1 unit for 1 unit.

Word Bearers are "zealots" and benefit from Chaplains as well as Turn 1 Daemon Summoning. New Daemonancers models are suppose to be SICK looking, but I believe just unit champ upgrades.

*Deathguard: Feel no pain and blight grenades for their Cult Terminators, new nasty flamers upgrades.
Death Guard gain a new ability (maybe Chosen squads only ?) that allows their poisoned attacks to ignore Armor Saves on a roll of a '6', much similar to Rending without the extra Armor Pen.

*Thousand Sons: AP3 bolters will be MUCH more useful under 6th Edition, and a couple new Psychic abilities, one of which (supposedly) can remove an entire enemy squad from the table on a failed stat test!

*Emperor's Children: Lash is finally changed to be more in line with Daemon version. More heavy weapons upgrade count for larger units. Better Bikes? Not sure what that means...

Emperor's Children have a haughtiness to them, but prideful, which may give them counter charge (on top of their already higher Initiative). More heavy weapons upgrades per squad, and their Chosen will be...scary fast!

Alpha Legion: Hardest to get info on, but "might" be able to force a re-roll on the type of scenario?! This honestly sounds more like a Special Character ability to me...but we'll see...

Alpha Legion apparently have the greatest access to Imperial style vehicles, as well as more of an unlimited Force Org slot selections, next to the Black Legion. Much of their Army will be able to upgrade to "Infiltrators".

Alpha Legion may force enemies to take Ld tests before they move or shoot.

Black Legion, aka Sons of Horus, aka Luna Wolves are tentatively stubborn, and have greatest selection amongst the units/vehicles. HOWEVER, they're not fully trusted, not sure how this works out in game terms.

World Eaters truly become the combat monsters they're story lined to be. Marked Dreads, and Daemon Engines will be a prime staple in most Armies...

Chaos will likely struggle to combat psykers, but Khornate characters will have ways of nullifying psychic abilities aimed at them

Nurgle Flamers can be made poisoned 3+ or even 2+ (possibly through a special character).

He also thinks Plague Knives will be poisoned 4+ with 6s ignoring Armour Saves. Although he goes on to say it’s likely only unit champions and Chosen/Possessed that get them.

Daemonic Mounts will be useful, with the Undivided version "worth while" for non-Marked Legions. He also implied that Tzeentchian ones will be fast, saying “Thousand Sons will be VERY pleased with their new found speed.”

there may be an additional heavy weapon upgrade for Chaos units, but was supposedly told it's not a Plasma Cannon

HQ
we will see the return of Droomrider, Doombreed, and Cypher as well as another 5 new characters. This does not preclude any or all existing special characters being included.

there will be a Slaaneshi Dreadnaught special character.

Ahriman will be better due to new Chaos Psychic powers as well as "some kind of guaranteed psychic ability that can't be stopped via Psychic Hoods, etc"

several special characters look to be getting varying levels of Eternal Warrior (1-3), including Abaddon, Kharn, Typhus and two more.

there will be more options for "mid-level" characters possibly able to be taken as 2-for-1 HQ choices, or possibly "as a separate Elite or Fast or Troop choice that can be split off" The example he gave was a possible unit of Dark Apostles that can then split off as squad leaders. This could end up being a sort of Wolf Guard unit, it is not yet clear.

Elite
Chaos Dreadnaughts will no longer act randomly, and are able to take marks, but will not be able to be Venerable.

Possessed will be improved and supposedly have upgrades either already included or that you can pay for.

Chosen will get more upgrade options, but that they will get costly quickly depending on the Legion and wargear you select. Wargear options for them supposedly include Jump Packs, Terminator Armour, all types of Combi-Weapons, Twin Lightning Claws and more.

There is a chance that certain HQ choices can take a Chosen squad as a retinue.

a new unit called Brazen Knights consisting of "Skull Champions" (possibly super Khornate CSM Champions) riding Juggernauts. He has more recently suggested that this could in fact be an Apocalypse formation to be released around the same time.

early discussions included the idea of Legion-specific “Daemonic Rider” units, such as Disc mounted Rubrics, Beast mounted Plague Marines, Seeker mounted Noise Marines, and the previously mentioned “Brazen Knights”, but went on to imply development may have stalled because of the question, “What would the other Traitor Legions get?”

Troops
there will be some kind of “Scout unit” which will not be available to World Eaters.

God-specific Daemons will likely be included

Daemons will remain as they are in the Daemons Codex, but with slight points adjustments to reflect the ability to summon them and certain 6th edition changes.

Thousand Sons (Rubric Marines) will not get any weapon options, but the new psychic powers can certainly fill that role. He has more recently suggested they may get more unit upgrades, especially for the SGT/Sorcerer.

Heavy Support
Slaughterfiends from Apoc will be available, as well as versions for other Legions and Marks.

Obliterators maximum unit size is increased to 4 and may lose the restriction to just energy-based weapons.

most types of Daemon Engines can be taken as 3 per FOC slot. He has also implied that there may be a Tzeentchian one.

Marked Legions are rumoured to get Havocs

the possibility of a new Monstrous Creature that is not a Greater Daemon but can have Marks of the Gods. Not all Legions can take one. For example Night Lords and the Alpha Legion are supposedly unable to take one. No further info is available as yet.

Chaos may get more Predator weapon options similar to Razorbacks, revealing that one of these options could be a Twin Linked Plasmagun turret with single Plasmagun sponsons.

Cult Terminators are likely to return under the proviso that they will only appear in dedicated cult lists.

75hastings69 claims there will be one in the 6th edition starter set.

Plastic Plague Bearers rumoured to appear in the 6th edition started. This has more recently been denied by 75hastings69.

Darnok has said that plastic Plaguebearers on round bases have been sighted, indicating that if they are not in the starter box, they may have a full kit in the works.

Plastic Raptors have been confirmed by the ever-reliable 75hastings69

Also supported by Jared Van Kell who also claims they may come a little later.

Darnok says there is a possibility of new Obliterators, although he is unable to say if they will be plastic or Finecast.

theDarkGeneral has said he's heard about a brand new Chaos Bike kit (not just recut) with lots of bits. No further information available.

theDarkGeneral claims there will be some way of converting Legion-specific models using a sprue of heads and shoulder pads which will fit all Power Armour kits. These would be Direct Only much like the Deff Rolla sprue for the Ork Battlewagon.

via Harry
What I heard was a box with the bits to make different legions.
But I thought this was something to do with Chaos Space Marines and the kit including various heads, spiky bits and icons to make different flavours of Chaos Marines.

theDarkGeneral has elaborated somewhat, saying Power Armour and Terminator bits could be separate:

via theDarkGeneral
So basically, all the Legions will buy the same boxed set for the majority of their models, but to make them Legion specific, separate sprues will be sold which will include shoulder pads, heads, banners, few weapons, etc. Terminators will also get separate sprues made available to them to become Legion specific.


Darnok tells us that painted versions of all 4 cult terminators have been sighted, but that they could be conversions. It is also possible they were built using the above rumoured sprues.

ant1clock let us know his local GW told him that the Thousand Sons kit is no longer available because they are moving to Finecast. It is unclear if this means a new, all Finecast kit, or if the existing metal components will move to FC.

There’s some chatter about a boxed set featuring a named character from every legion. Jared Van Kell  has implied this will be Horus Axiamand, Honsou, an unknown Raptor Lord (Night Lords?), Kharn the Betrayer, Ahriman, Typhus, and Lucius the Eternal. This could be where conflicting reports of the inclusion of some characters has come from.

via Darnok
an Iron Warriors character (?) has been seen, with a huge servo harness