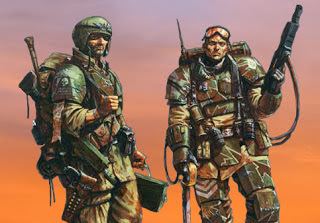 2014 will be a year of big changes, and these are geared towards the community. I am not talking about 7th edition or a rules update, but instead the most common troops that people buy moving to pushfit plastic. While Tyranids may already be here and just missed the change, it looks like the Imperial Guard will be the first of these models to hit. Steel Legion re-sculpts for pushfit plastic models.


There is a couple different subjects here, and normally I would like to separate these, for a more dedicated post, but I think they tie into each other on what the future of releases will become. The interesting thing here, is that Games Workshop seems to be responding to the high costs of our hobby, and providing us with some alternatives and more ways to get us the models that we need.

Please remember that these are rumors, but seem very reliable on the information below. Even though this is a new direction, these appear to be very genuine.

via an anonymous source on Faeit 212
I have seen pictures of plastic 10 man squads of steel legion and imperial guard veterans. The steel legion appear to be pushfit plastic and are plastic re-sculpts. There is also a big tank seen, but no additional information right now.

All finecast has been discontinued and no models will be made in finecast. This currently only applies to 40k to test how it works with the community.

I have heard a rumour that GW are moving to a stage where they want to make more troops as pushfit models, and use multipart plastic sprues or elite/fast attack/heavy support models, to reduce consumer prices for more commonly purchased troop choices.

You can expect pushfit for named characters and multipart plastic for generic hq.

A Cipher model is done that appears to be pushfit, and I expected it to be released with the dataslate which did not happen, so perhaps something is coming.
1/03/2014
Natfka
40k, 6th Edition, Chaos Space Marines, Imperial Guard, News Headlines, Rumors, Warhammer 40k