The Future of Adeptus Titanicus: Titandeath 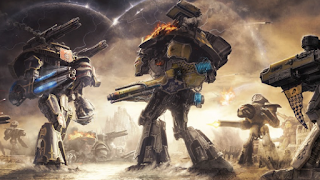 A Twitch episdoe focused on Adeptus Titanicus just ended while I was not able to watch it, one of the guys over on the Titan Owners Club got some notes to share with us!

Here is what we are looking at in the near future!


Still my biggest downer here is that no Xenos are still planned.

Head on over to their site to see more.

Notes from the Shadow Wolf on Titan Owners Club
http://titanownersclub.blogspot.com/2018/11/adeptus-titanicus-twitch-stream-review.html

The Warbringer Nemesis MIGHT be released in AT, but they are not 100% sure if it will be done, or when it will happen if they decide to.  “Hopefully one day, but no promises.”

Emphasis on new weapon sprues before new Titans.
Regarding the Imperator, “Never rule it out, it might happen, but don’t hold your breath please.”
Three different heads on the new Warlord AT sprue.

New weapon sprues for 2019 are expected to be early, but no definitive month.
Arioch Titan Claw has a Vulcan Megabolter modeled, but it has no impact in game beyond being factored into the profile already.
Cerastus Knights currently cover only the Lancers, but more are on the way.
Cerastus Knights are meant to hunt bigger game and disrupt them.
Reaver Chainfist/Powerfist can be built left or right-handed.  Three new heads for the Reaver.

The Future:
More Legion traits will be coming out in future supplements and "quite a few" have already been penned.

Focus on Adeptus Titanicus is still set in the Horus Heresy and they don't have an eye on Xenos races at this time.  "We've got no immediate plans to release alien craft or monsters."

They are willing to expand the Adeptus Titanicus line past Horus Heresy if the game proves popular enough.

The Titandeath supplement will be a type of "black book", but they aren't willing to give away too much about it.

Titandeath will have rules for SEVERAL Legions.

Some of the less common EPIC weapons that don't have a 40k equivalent are likely to see a resin Forge World version later on.

They are working on an FAQ for AT, but it's still a way off at the moment.

Miscellaneous:
The Warhammer TV team likes the Vulcan Megabolters on the Warhounds for shield stripping duties.

Nemesis is NOT a Titan class, but a sub-class. (Nemesis is usually referred to as an anti-Titan loadout - TOC)

Knight Banners are going to focus on the Banner on the whole and not on the differences between Knights within a class (Questoris, Cerastus, etc.)

Naming conventions are not set, but are defined by each Titan Legion.  Essentially, there's no wrong way to name your engines.

Imperial Hunters are featured in Titandeath, they have a dappled green and white pattern.

No new terrain on the books at the moment.

One of the big things they enjoy about AT is that you can easily create your own Titan Legion since so many were destroyed (and undocumented in the lore) during the Horus Heresy.

Currently there are no known gaming events at Warhammer World coming up for AT.