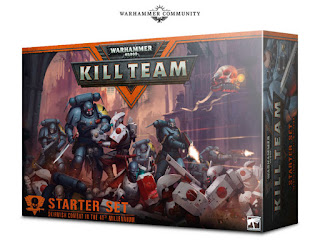 The new Kill Team Starter Set has two kill teams- The Fangs of Ulgrich (Space Wolves) and the Advance Team Starpulse (Tau) in it along with terrain and more.


via the Warhammer Community
https://www.warhammer-community.com/2019/08/21/forging-your-kill-teamsgw-homepage-post-3/

The awesome new Warhammer 40,000: Kill Team Starter Set is up for pre-order this weekend, and includes two predetermined kill teams – the Fangs of Ulfrich and Advance Team Starpulse. However, these models (and even the kill teams themselves) are just the start of the possibilities available to you. Today, we’re investigating how you can take your Adeptus Astartes and T’au Empire kill teams to the next level. 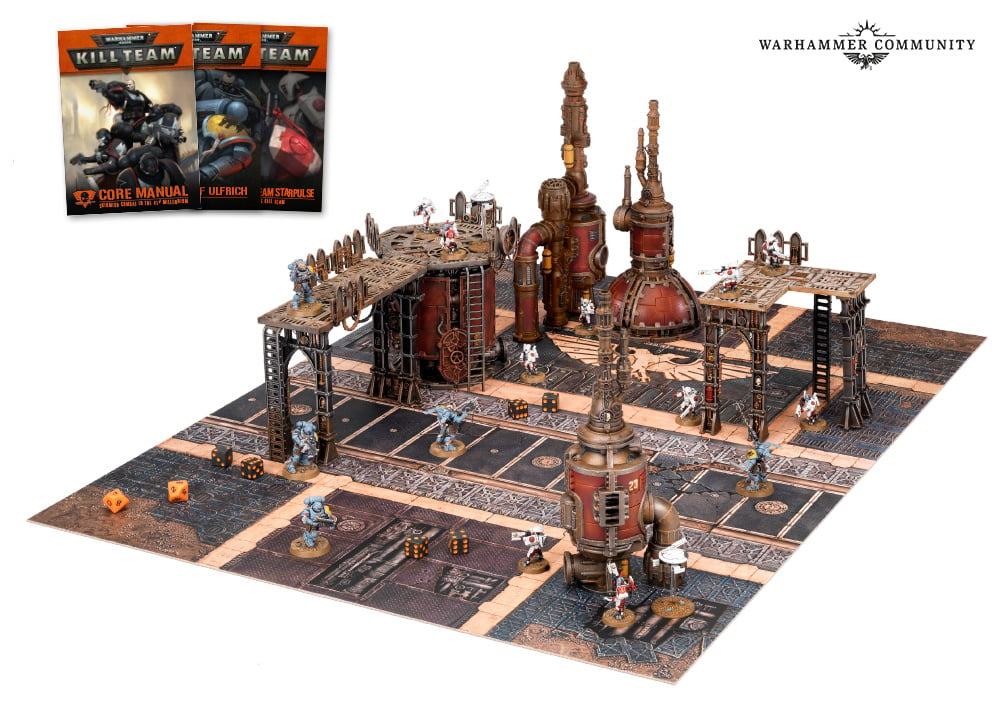 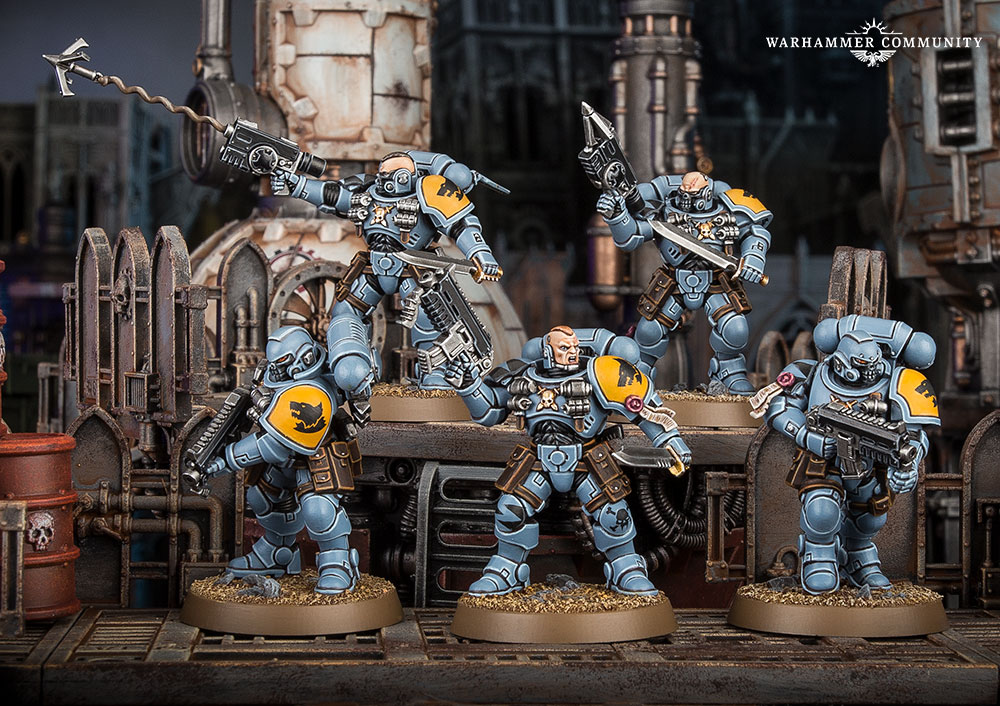 The Fangs of Ulfrich comprise five Reivers – they are among the best all-rounders in the game thanks to their solid profile, abilities and wargear options. Their grapnel launchers, in particular, are fantastic for circumnavigating dense terrain, enabling you to outmanoeuvre all but the most agile kill teams. So how can you improve on such a flexible kill team? For starters, you’re actually able to create a larger pool of warriors than you can field in a single mission, giving you the option to customise your kill team to the one at hand. With that in mind, here are a few options to strengthen your line-up even further…

One of the few areas in which Reivers don’t excel is dealing with heavily armoured Factions such as Heretic Astartes or Necrons. Reivers can overcome this problem with weight of shots from their bolt carbines or a series of well-placed strikes from their combat blades, but having dedicated warriors in your kill team pool to field against such enemies is far more efficient. An excellent option is an Intercessor Sergeant with power sword. He’ll provide you with 3 Attacks – or 4 if you also make him a Combat specialist (which you totally should!) – all of which will hit home with a nasty AP of -3. There are few enemies that can stand up to that, but if they’re especially tough, you can always use Angel of Death for a bonus Attack against them!

Being able to eliminate a threat from a distance from the very first battle round is always a satisfying option to have – especially if your opponent has a dangerous specialist or heavy-weapon-toting gunner at their disposal. A Scout armed with a sniper rifle is an obvious option here, but an Intercessor with a stalker bolt rifle is arguably an even better alternative thanks to its AP of -2. Not only is an Intercessor tough enough to risk trading shots with their target, but you can use Masterful Marksmanship to ensure that your attack really counts.

If you want another alternative – or simply to double-down on this approach – you can take an Intercessor Gunner with an auxiliary grenade launcher to lob krak grenades at your target of choice from up to 30” away!*
Here’s a sample 100-point kill team that’s based on the Fangs of Ulrich but with a pair of Reivers swapped out for three Intercessors:

Lead From the Front 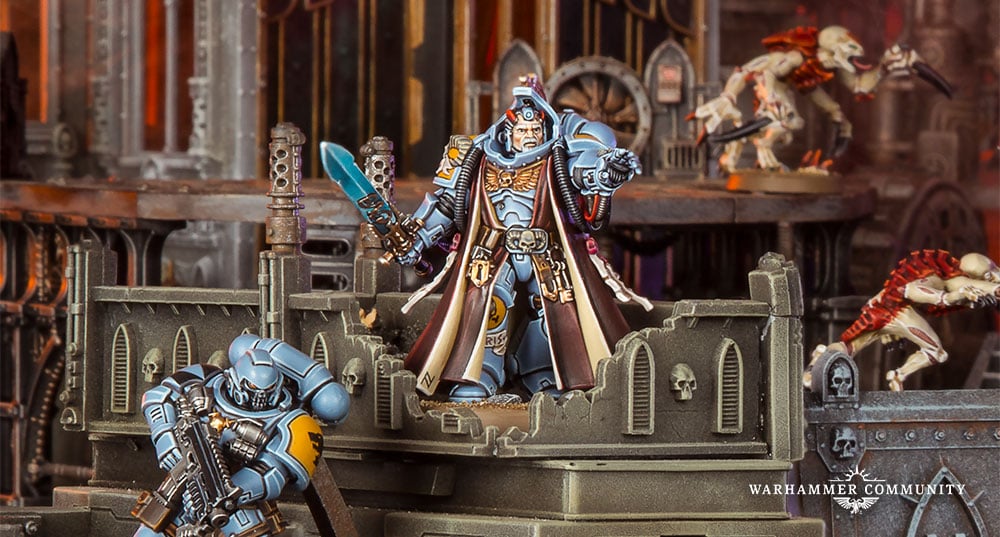 The Kill Team: Commanders expansion introduced powerful Leaders and support Characters to the game. Adeptus Astartes kill teams are blessed with four powerful Primaris Commanders in the form of the Captain, Lieutenant, Chaplain and Librarian. If you want to prove the superiority of the Adeptus Astartes in all aspects of war, look no further than these guys! Not only are they all hardy and incredibly capable warriors, they can use handy Aura Tactics (or, in the case of the Primaris Librarian, psychic powers) to substantially augment the other warriors in your kill team. Check out the Primaris Captain’s Rites of Battle, for example.

The Best of the Best

Kill Team: Elites adds another new dimension to your kill team options, introducing even more Commanders, such as a Captain in Phobos Armour, as well as brutally powerful veteran operatives like Terminators. The addition of any of these models to your kill team will offer you some dynamic new strategies in such a skirmish setting. For example, charging down the middle of the battlefield with a nigh-invincible Terminator equipped with thunder hammer and storm shield as your Reivers use their grapnel launchers to sweep down the flanks would certainly be an intimidating prospect for anyone to face. Against an especially dangerous kill team, you could even field multiple Terminators!

The Elites expansion also includes Sub-faction rules that will enhance your Adeptus Astartes kill team according to your choice of Chapter Tactics. If you stay true to the Fangs of Ulfrich, for example, you’ll gain the Space Wolves’ Hunters Unleashed ability – a tasty proposition for all of your warriors, but none more so than the aforementioned Terminator(s) or power-sword-wielding Combat Specialist! 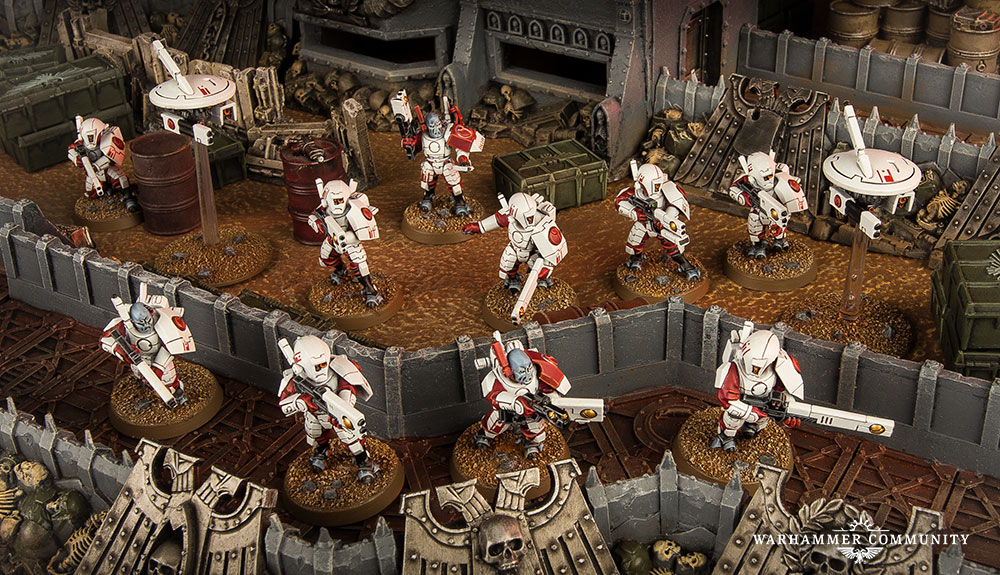 The T’au Empire kill team in the starter set includes 10 Fire Warriors and a pair of DS8 Tactical Support Turrets. They are blessed with some of the most formidable ranged weaponry in the game. The Fire Caste may eschew melee combat where possible, but they more than make up for this with the murderously powerful short-ranged pulse blasters of their Fire Warrior Breachers. So how can you reinforce such a well-equipped kill team?

One of the most efficient ways of securing battlefield dominance (and the T’au Empire are all about efficiency!) is to eliminate the greatest threats to your own warriors. Markerlights enable you to pick out a single enemy for ruthless obliteration by augmenting the accuracy of any models who target it. Fortunately, you can readily get your hands on markerlights by fielding MV7 Marker Drones or Pathfinders. Simply light up your biggest threat, then fire at them with every gun at your disposal until they’re little more than a bad memory!

If you want supreme manoeuvrability (and who doesn’t?), the XV25 Stealth Battlesuit will be an asset to any T’au Empire kill team. It can casually drift over intervening terrain like it wasn’t even there, before mercilessly gunning down any enemies skulking behind cover with its burst cannon. In return, the Stealth Suit’s Camouflage Fields confound enemy fire, making it very difficult for your opponent to pin you down. If you need an assassin to eliminate an especially dangerous enemy, tag them with markerlights as mentioned above, then let rip with a Stealth Suit equipped with a fusion blaster to all but guarantee their demise – after all, it’s primarily an anti-tank weapon!

Here’s an updated 100-point kill team (well, 99 points!) that’s a variation of Advance Team Starpulse and includes an XV25 Stealth Battlesuit ‘assassin’ and three Pathfinders to set up the killshot with markerlights…

Unlike those of the Adeptus Astartes, the Commanders available to the Ta’u Empire in Kill Team: Commanders are better suited to leading their kill team from a position of safety. The reason for this is that the Cadre Fireblade and Ethereal are incredibly effective support Characters who greatly benefit the rest of your kill team. Form up a firing line of Fire Warriors around a Cadre Fireblade, then play the Volley Fire Aura Tactic and you’ll see what we mean.

Take the Fight to Them! 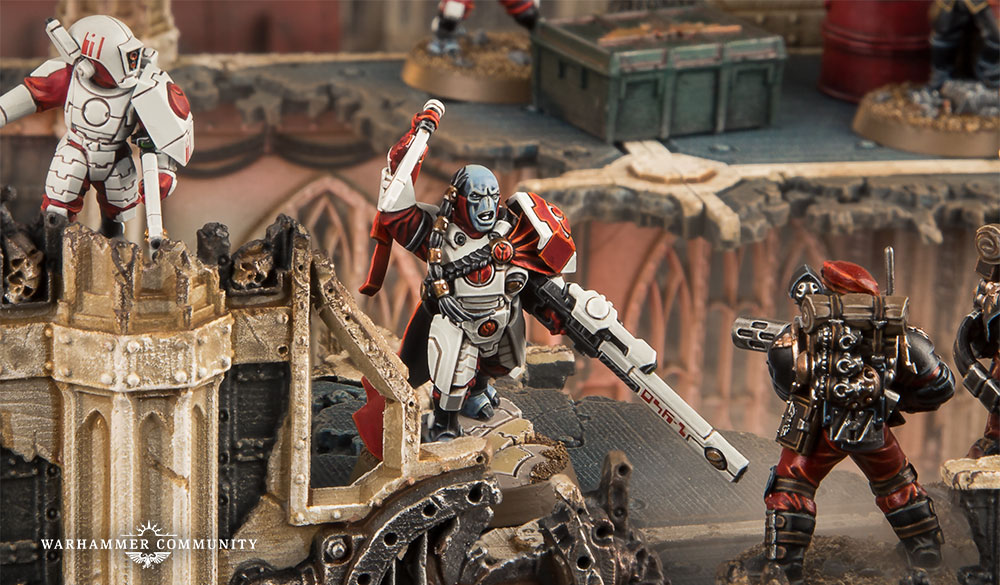 If you’d rather go on the offensive, the deadly Commanders and operatives in Kill Team: Elites offer you everything you need to bring the pain to your enemy’s doorstep thanks to the inclusion of Kroot Carnivores and a number of battlesuit options. The T’au Empire also have access to arguably one of the strongest Characters in the game – the Commander in XV85 Enforcer Battlesuit – who combines durability, accuracy and firepower with the freedom of flight and this awesome Aura Tactic… 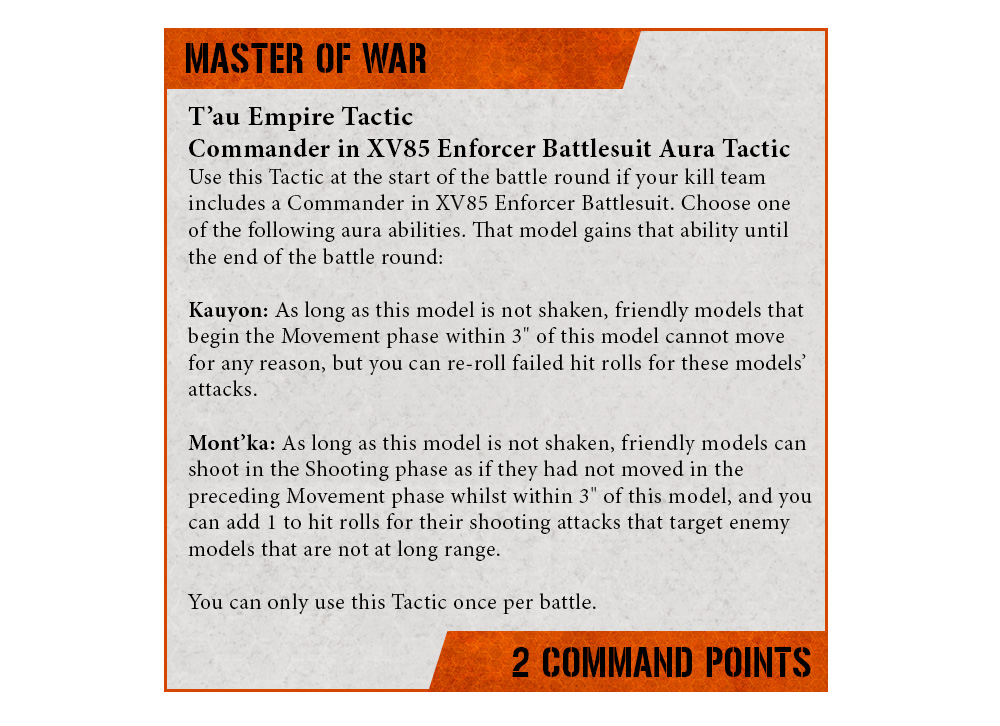 As with the Chapter Tactics Sub-faction rules in Kill Team: Elites, the T’au Empire Sept Tenets offer you a number of powerful abilities according to your choice of colour scheme or favoured playstyle. If, for example, you want to blow apart the enemy at point-blank range with your pulse and fusion blasters, the Farsight Enclaves is the perfect match, as they’re justly famous for the ferocity of their counter-strikes…

It’s fair to say that if you’re pre-ordering the Warhammer 40,000: Kill Team Starter Set this weekend, you’ll have plenty of ways to reinforce and enhance the two kill teams in the box.
8/21/2019
Natfka
Kill Team , Warhammer 40k