Grav-Weaponry and Its Dramatic Effect on Our Game 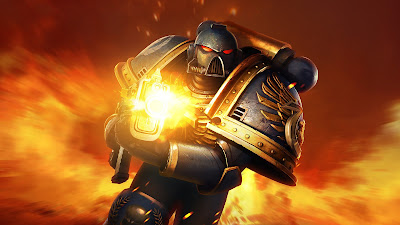 Grav-Weaponry has created a lot of noise lately for the new Space Marine codex, and rightfully it should. As a Dark Eldar player, I see grav-weaponry like an advanced form of poison weapons. They have their place, and do a very specific job. (no i have really sat down and tried work both into lists yet).

There is also some serious controversy that comes with these weapons.


First off, lets look at the Grav-Weapons.
They are AP2 and would based on the armour save of the opponent. So a 3+ save would wound on a 3+.
Most are also Salvo weapons (not the pistol). The Grav-gun is a 18" 2/3, and the Grav-Cannon is a 24"  3/5. This means the Grav-weapon is great if fired from a model that is relentless, and much more limited to one that is not. Lucky though for Marine players, these guns can be fitted onto bikes (grav-guns) and centurions (Grav-Cannons).

via the Space Marine codex
Grav-Weaponry affects the local gravity field, using its victim's mass against them, an ordeal that will stun those it does not kill outright.

Space Marine bikes
Here you get the best of both worlds when you take a grav-gun. You get two per squad, and can move 12 and fire 18 with 3 shots. Best of all, each gun also comes with a twin linked boltgun, so you obviously have the options to fire them and mow down lightly armoured targets. Great range, flexibility, and the squad can still take a melta bomb, or even an attack bike with a multi-melta.

Centurions
Hugely expensive, but able to field the awesome power of the grav-cannon, firing 5 grav shots into your opponents at 24". move 6 fire 24. Not to mention that the centurion can still keep his hurricane bolter, to add to this anti infantry killing machine. Did I mention they come with a grav-amp (re-rolls to wound for the grav cannon. When rapid firing with the hurricane bolter (move 6 fire 12, the Centurion can fire an amazing 11 shots per model)

Against vehicles
For vehicles, once you hit, you must roll a 6 on a d6 to remove a hull point and immobilize your target.

Controversy.
Of course people are going nuts. There is a heated argument on the rules of these guns regarding cover saves for vehicles, and hull points.

So people are saying that if you immobilize the vehicle, and then do it again that the additional hull point is removed, thereby doing 3 hull points of damage with two results.

Opinion: Failure. This does one thing this interpretation is forgetting. You do not roll on the Vehicle Damage Chart. It says in the rules for the gun. 1-5 nothing happens. On a 6 the vehicle is immobilized and loses a hull point. Grav-weapons have their own chart, and do not use the brb vehicle damage table in the rulebook where that rule is listed.

Regarding cover saves. This one I have spent little time with, but it seems like you would get your cover saves. People are claiming that because you do not roll on the vehicle damage table (that the brb says) you can only take a cover save before rolling on the vehicle damage table. Ive quickly read through the cover rules again, but did not see what they are talking about. However the Space Marine codex says this explicitly, When resolving a hit against a vehicle, roll a d6 for each hit instead of rolling for the armour penetration as normal.

Your take on the Grav rules?
Please discuss the rules, and not slam each other.
9/12/2013
Natfka
40k, 6th Edition, Rules, Space Marines, Warhammer 40k