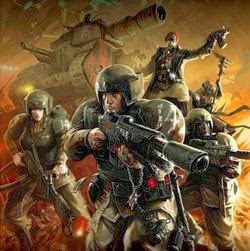 There have been some Imperial Guard rumors floating around, and there are some details emerging around the internet on what will be in this codex. Check out this latest sets  of rumors. There are two sets of rumors here


Please remember that these are rumors, and take them with a grain or two of salt. Some of these are a few days old, but when the Inquisition is announced, its hard to stay focused.

via Noel at Wargamer
-‘Mission Objectives’ are potentially a new special rule for the Imperial Guard, although my channels are a little dry on this front, one can only begin to imagine what they do. I heard on the grapevine, that this special rule would allow even sergeants, to order ‘minor orders’ to their own unit.

-Formerly Forge World dominated vehicles will take a tour in the Imperial Guard codex. This means we could see such units as the Forge World Destroyer Tank Hunter as part of the upcoming codex. Although one finds it extremely unlikely they will receive a new plastic kit.

-Headquarters units have seen a massive shake up. Above the whole organisation, some units have been deleted, others modified. You start by buying a command squad, this is then changed by swapping the officer for a commissar, if one wishes too. The three present advisors have been retained, with the addition of the Primaris Psyker as a command squad advisor.

-Ministorum Priests are back in the same manner as before, this time though it has been rumoured they increase the ranged output of the unit, as well combat potential. Maybe in the form of the ‘preferred enemy’ special rule, who knows?

-The mighty (or not so mighty Enginseer) has stayed relatively the same, except for the transition from HQ to either Elite or Heavy Support. But what excites me the most, are their roles on the field of battle. Apparently they will act much like Royal Courts in the Necron army, bought with certain upgrades, then attached out to other units, to confer certain benefits to that unit.

-In terms of repacking, it is believed that special weapon squads will receive their own box set. This is also rumoured to be extended to veteran squads and heavy weapon teams. Coming in boxes of five models, with a wide variety of special equipment.

-Moving on from the veteran weapon squads re-boxing, it is believed that they will be changing their position on the battlefield. With smaller squad sizes, veterans seem to be taking a fire support role, that focuses on battlefield specialisation. 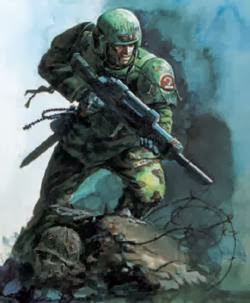 via Larry Vela on Bols
Codex Imperial Guard launches in March 2014
Look for many refreshes in the codex rules.
Expanded command system with the return of Doctrines
The missing IG tanks will be released:
-Griffon/Collosus/Medusa artillery kit
Stormtroopers released
Veterans released
-These two infantry kits include many, many optional bits to build command squads and even penal troops.
New centerpiece kit is a Horus Heresy era tank.