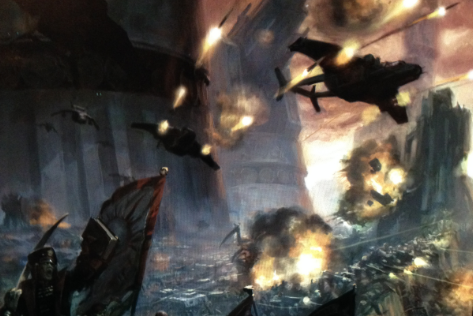 Personally I have never opened up a codex in another language besides english. I had known that the units for each codex had different names in different languages, as this was evident if you spend enough time on community related blogs and sites. However, I was told that the English names for units now may be possibly being used to create a universal name for each unit, despite what language its in.


I wasnt sure, so I figured we could throw this out to the community and see what we can learn from each other. Are all the Astra Militarum codices using an English naming system in different languages?

This is from the my inbox.

via a reader here on Faeit 212
I just bought my French paper copy of the new IG Codex, and I saw that the Units Names have not been translated in French.

This is abit strange as the Tyranid got their "Genestealer" translated into "Genovore" for the French version. (Which means "Gene-Eaters" if you re translate it into English)
And suddenly for the Astra Militarum, the unit names and also some equipment names are in English.
But not all equipment names have been translated, that's what makes this strange.

If the goal was to make the unit names the sames for every language, to be able to speak of the same unit with the same name in English and French for example, then I like the idea.
But if it's a lake of work on the codex, then it's a shame.

That can confuse some people, personnaly when I speak with French players and I say "Sternguards" instead of "Vétéran d'Appui" they are lost.
Then the Frenchies will have to relearn the name of their IG units, but that could be cool to have "universal" naming for different languages.
4/17/2014
Natfka
40k, 6th Edition, News Headlines, Rumors, Warhammer 40k