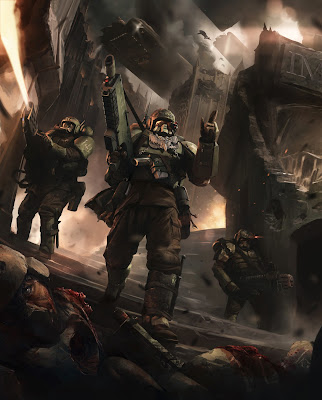 Someone has finally seen one of our mythical creatures in this hobby, the plastic Storm Trooper. Its no wonder after reading this, that we have had rumors of this kit for well over a year. It seems that this was probably done a long time ago, and has just been sitting waiting for the proper time to release.

With Imperial Guard in March and codex Inquisitor about to hit next week, are plastic storm troopers finally going to become a reality?

Please remember that these are rumors, and of course I will start off with 5 boxes (assuming 10 per box).

via StrykerSniper on Warseer
I'm praying for stormtroopers, real ones, as a second troop choice. I did have a tiny look behind the iron curtain of GWs privacy policies, and I was able to see some mockups of the new veterans/stormtrooper boxed set, and it would be an amazing kit to build warbands or stormtrooper squads. Also I saw a model that appeared to be an Inquisitor, and was wearing a long cloak and armor.

I could see GW allowing stormtroopers as a troop choice to induce additional sales of the new kit, which, frankly, floored me. The details were great, with kasrkin style armor, and all sorts of weapons including hellguns, sniper rifles, special weapons, a cool missile launcher, a bunch of sergeant options, bolters, and lots of shotguns that managed to not look like scout shotguns. Also, the bolters did not look like marine shotuns, they were a little more human sized.

Some of the poses were also amazingly dynamic. Some were stoic standing poses, while a couple were very John Woo! There were also a lot of extra bits, poches, packs, grenades, knives, some scanner like equipment, and what appeared to be night vision goggles. If i were a puppy, I would've piddled on the rug, and it was a supreme act of will not to grab the models and run for the door. Apparently, they have also been ready for some time. Please dear God, let these see the light of my hobby store soon and I will have at least 5 boxes! This might even revitalize my Guard army.

Oh, and there were a bunch of heads! respirator heads, heads with berets, bald heads, heads with mohawks and crew cuts. Most were scarred, and one had an eyepatch, while another had a disfigured eye with what looked like claw marks, one head was smoking a stogie, and there were two heads with berets. There was even a knife that looked like a trench knife with raised knuckle dusters. There were scopes, a hand radio, and a bunch of bits for the bases including plants, a snake, and some ammo cans and satchel charges. There was even a hand holding an entrenching tool (shovel to you non-military types). There were a few holstered pistols, and as a delightful surprise, there were also autoguns in addition to lasguns, and there were bits for pistol and close combat weapon troops, although few were chainblades. There was a demo charge, melta bombs, and camo cloaks.

I was very, very impressed. The attention to detail was phenomenal. If you have any questions, ask them quick, before I am "sanctioned" by the inquisition. What is that sound outside the window.......?
11/07/2013
Natfka
40k, 6th Edition, Imperial Guard, Rumors, Warhammer 40k