New Storm Trooper Information Clears Up What Was Seen 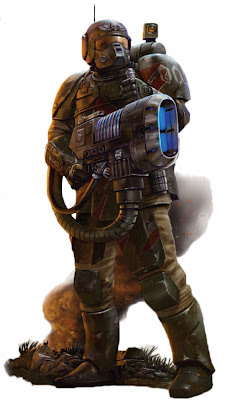 Plastic Storm Troopers/ Veterans is going to be a huge seller. Yesterday we read that someone had seen some mock-ups of a new Storm Trooper box, a kind of behind the scenes look. This rumor clarifies exactly what was seen, and helps on what we can expect to see when this kit gets released.


Even though I have tons of models for my vets (a full 6 squads), I will need to be getting several of these squads to fill in the needed many areas I will need.

Please remember that these are rumors, and nothing official has been released.

via an anonymous source on Faeit 212
I have some infos for you about the recent Stormtrooper sighting:

A lot of the bits described (respirators, plants, NVGs, some of the heads, some of the CC weapons, etc) were actually looted from other plastic kits (Command Squad and the like) and won't be on the sprue for the new box. They were used to create some kit-bash conversions to show what can be done with the new set and a bit box.

The described "Inquisitor" with a greatcoat over carapace armor is an option for the Sergeant for people who want to build their miniatures "Arbites-Style". Arbites won't be an option in codex, but you'll still be able to get Veterans in carapace with combat shotguns yelling "I AM THE LAW!".

All in all the new set is supposed to be more like modern "Hollywood"-SpecOps (think The Expendables).