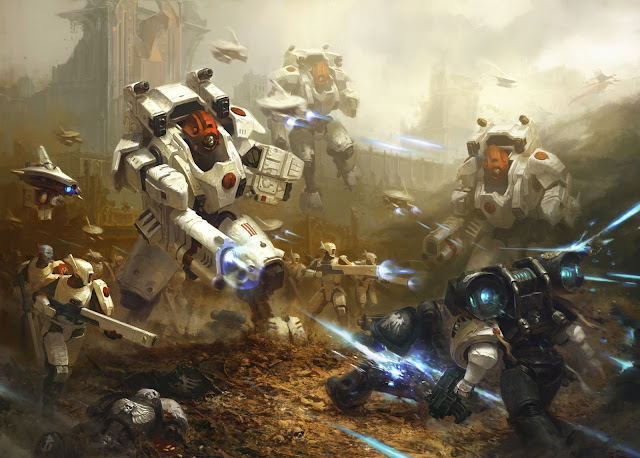 Some additional information is here, giving us a look at Necrons, Orks, Tau, and more details regarding the TC and just how to build your Land Raider using the Chapter Approved rules.


Please regard these as rumors until we get verified information from the Warhammer Community or other leaked images.

via anonymous sources on Faeit 212

Necrons
Warlord Trait- Reduce damage inflicted on your Warlord by 1 with a minimum of 1.
Relic- 1 time per battle at the end of movement phase, remove the bearer of the relic and one unit within 3" and set them up anywhere on the battlefield out side of 9" away from enemy models
Stratagems
1. 2CP a Canoptek unit at the beginning of your turn gains Reanimation protocols until end of turn
2. 2CP re-roll reanimation protocol rolls of 1 this turn.


Orks
Warlord Trait- Add 1 to characters strength
Relic- Range and Type: Melee S: +2, AP2, D3 Wound rolls of 6+ inflict D3 mortal wounds instead of normal damage
Stratagems
1. 1CP 2 infantry units within 2" of each other and one contains more than 10 models and the other less than 10 models, you may combine them into a single unit for the rest of the game at the end of the movement phase
2. 1 CP select an Ork infantry or Biker unit before they shoot, each to hit roll of a 6+ gets to immediately shoot again. extra attacks cannot generate additional shots.

Tau
Warlord Traits
1. re-roll failed to hit rolls if they have if they have not moved this turn
2. the Warlord can advance and shoot  as if it had not moved
Relic- 1 time per game, you may re-roll a single hit roll, wound roll, or damage roll for the bearer or a unit within 6". Also each time a stratagem is used by opponent, roll a d6 and if a 6 is rolled, gain 1CP
Stratagem- use when an enemy unit is hit by a marker light, gain d3+1 markerlight counters next to the unit.