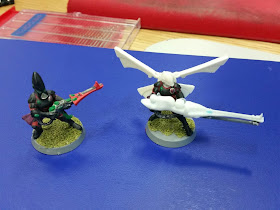 This goes back a long way but long before even Forge world released the rules for Corsairs I was planning on converting some of my old static and metal Eldar guardians into some corsairs of my own. I planned on using a warlock as a captain with wargear to represent the warlocks powers.

However the warlocks powers become random and Forge world released rules for the Corsairs. I still wanted to convert my old guardians rather than spending a fortune on their kits and more new guardians.

Now I should point out that I will take my time on things and by that I mean years, lots of little experiments and sketching goes on and a lot of this during my lunch breaks at work and if I get stuck I leave it for a while and come back to it.

I started coming up with ideas for casting my corsair jetpacks. This has taken some time and evolved as I learnt how to use the materials to hand so I have included a number of photos from over the years. the 2 sets of wings setup was inspired by a batrep I saw on YouTube where someone had done something similar with their Autarch and was a late amendment to my design.

First off I started off coming up with some sketches to give me an idea of what I want. I have pages of this stuff but this gives you an idea.

I like to start of full on and then scale back to something more realistic as I develop my skills with the materials I am using.

I wanted to get them 3D printed but my first attempts proved too expensive and not as good as I wanted. So I created some test wings, these normally had a plasticard core and then after some trial and error I found that sticking thin sheets of acetate gave the best way to get the ridge I wanted on the wings.

After some more trial and error I decided on an open top mold as this was a lot quicker to load and clear not to mention less prone to air bubbles.

As a side note I used liquid blu-stuff. It is not that cheap but it is so easy to use and cures so fast it is ideal for me.

I did a small cast and once I created a basic set I stuck them to some acetate to create molds from. The reason for this is it leaves a nice smooth surface in the top of the mould allowing you to scrape excess resin off.

In one photo you can see the disassembled jig I used to make my mould. A little Lego and play doh go a long way with this. The play doh is there to stop the blu-stuff leaking under the thing you are trying to make a mold of and encasing it. and the lego is just a nice dynamic way of creating a jig to pour the Blus-stuff into and allows you to change the width and height as needed.

There is a photo with some of the 3D stuff I printed off, these I intend to cast at a later date in a more complex 2 peace mOld but as you can see I had to amend the shuriken cannon as the 3D print was a bit to flimsy in places. I had to come up with some new variants for these as the static plastic guardians at their arms fixed in one position and I had to replace part of the arm and a hands to get this to work and there was no current way to do it with existing weapons. for the special weapons I have a load of rouge trader Eldar weapons I can use.

And now on to the latest stage of my work. The head is just a cast of a dark Eldar Jetbike helmet and the backpack is a modified DE warrior heavy weapons pack (I had a lot of trouble coming up with a suitable jetpack so this was a good find). It is still early days but with the current system I can cast 9 sets of wings in just over an hour and at 2p a set I don’t really care if they are not all perfect.

As I said I still need to cast the heavy weapons and I have to strip a good 60-70 plastic guardians but slowly and surely they are taking shape.

I hope this inspires some of you to have a go at this sort of thing yourself after all playing the game is only part of the hobby.

I am by no means an expert and all the bits I have used for this are either found round the home or ordered from eBay so have a thing and give it a go. 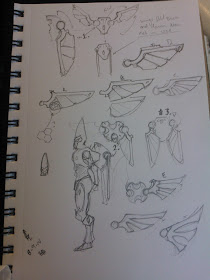 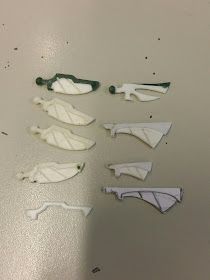 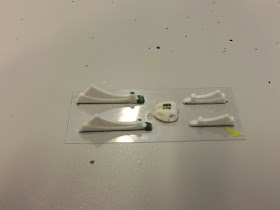 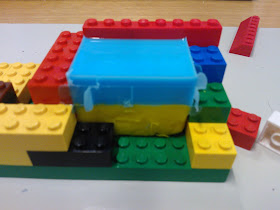 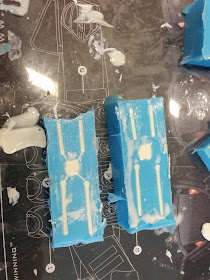 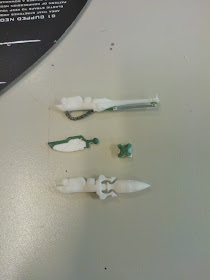 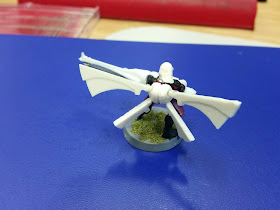