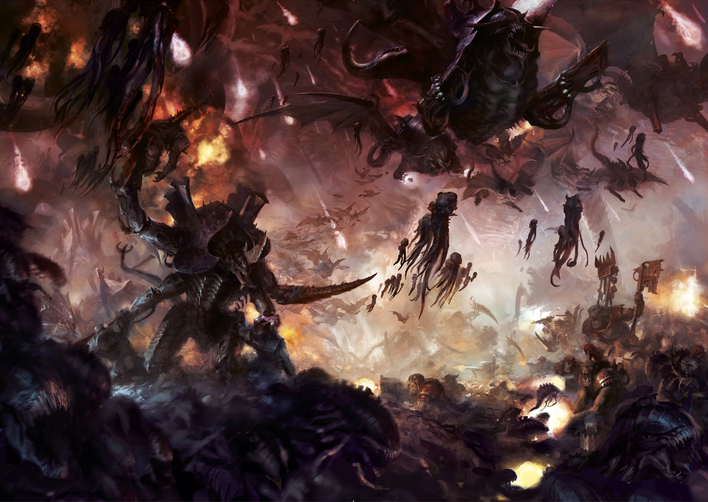 There is a lot of leaked images floating around everywhere now. For the most part they are on forums at the moment, so I have linked the pages, so you wont have to wade through page after page. The formations for the Tyranids Leviathan are looking really good, and I think that Tyranid players will be rejoicing with these newly released formations.


Here is the leaked release list for this week. Images found here
https://www.facebook.com/mexork?fref=ts

They are on Dakka, and there is a lot of leaked images there, including the index page, all the Warlord traits
http://www.dakkadakka.com/dakkaforum/posts/list/1110/621735.page
http://ftgtgaming.blogspot.com/2014/11/leaked-shield-of-baal-leviathan-tyranid.html

Hyptertoxic Node- Poisoned models gain the instant death rule on a roll of a 6, and Toxicrenes gain instant death on a 5 or 6. also the Hive Tyrant has Toxic Miasma and all tyrants within 12" can use Toxic Miasma each turn.
1 Hive tyrant
1 toxicrene
3 Venomthropes

Neural Node- Shadow of the warp is 18" on the maleceptor, and units can re-roll 1's on psychic tests
1 Maleceptor
3 Zoanthropes

Skytyrant Swarm- Hive Tyrant gaints 6" synapse, and the gargoyles can look out sir on a 2+. The tyrant and gargoyles are a single unit.
1 Hive Tyrant
2 Gargoyle Broods

Sporefield- formation has infiltrate, and anytimes  unit is destroyed, on a 4+ it comes back in ongoing reserves.
3 Mucolid Spore Clusters
3 Spore Mine Clusters