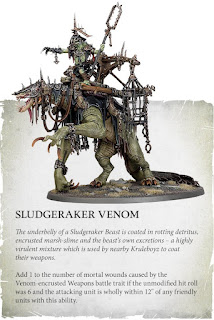 The Kruleboyz are the latest and greatest of the Orruk Warclans which will be available this coming weekend at your stores. Its already up for preorders and for now, lets take a look at some rules for the  Kruleboyz to see just why you are starting this army. 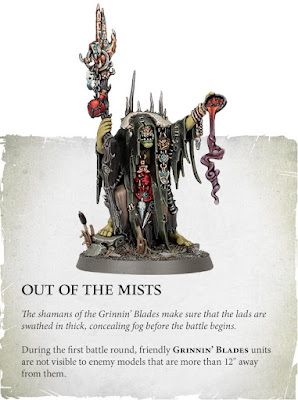 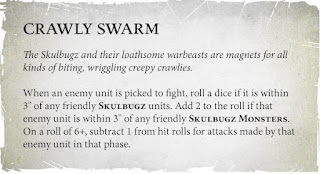 While the Kruleboyz are a grimy lot, the beasts they drag from the swamps really glisten with muck. Breaka-bosses on Mirebrute Troggoths stalk the bogs hoping to find the biggest and juiciest specimens that can serve as vicious mounts for their Killabosses. Having so many large Monsters in your Kruleboyz force gives you plenty of chances to use the new edition’s monstrous rampage rules to their fullest.
If building a horde of slimy Monsters sounds like your kind of fun, the Skulbugz warclan are the Boyz for you.  They surround themselves with a blanket of swarming, biting, wriggling insects that crawl up their foes’ legs.
It’s truly horrifying stuff, and these creepy crawlies are more than a little distracting for anyone trying to fight this warclan.
The leader of your army should be the foulest of the lot, and the Kruleboyz have a whole host of foetid options. This week’s upcoming pre-orders see Swampboss Skumdrekk arrive on his Sludgeraker Beast – a diabolical creature covered in layers of detritus, slime, and other hateful substances. So potent is this mixture that nearby Kruleboyz coat their weapons with it to power up their attacks even more than their usual poisons do. 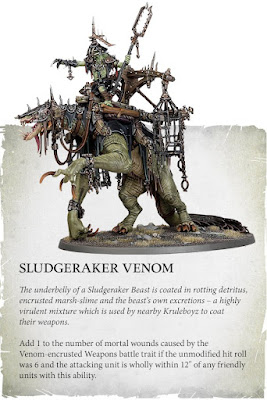